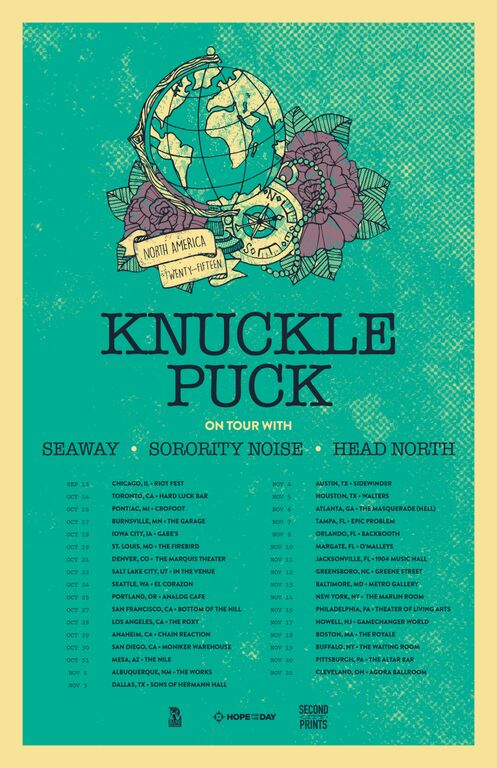 Sorority Noise and Head North have announced they will be heading on a North American tour this fall with Knuckle Puck and Seaway. A full list of dates can be found below. Sorority Noise are touring in support of their recent full length record Joy, Departed, out now via Topshelf Records. The band is coming off a tour supporting Motion City Soundtrack, and begin an east coast run with You Blew It! and Microwave today. More information on that tour can be found HERE.

Head North released their EP Bloodlines via Bad Timing Records this March. The band has an exciting announcement and new music coming soon.

Cameron Boucher started Sorority Noise in late 2013 with friends as an outlet to explore musical styles outside his work in Old Gray. The group then recruited Ackerman and issued their debut full-length, Forgettable, in May 2014. Much buzz—and tours with rising stars Modern Baseball and The Hotelier—followed, as did a split 7” with Somos and the arrivals of Singer (whom Boucher had played with in Old Gray) and McKenna. Joy, Departed, the band’s sophomore album and Topshelf Records debut, is more than just the best iteration of Sorority Noise to date; the album also marks a creative shift for Boucher, who draws musical influence from a diverse crop of acts spanning Regina Spektor and jazz trumpeter Chet Baker to The Smiths and Broken Social Scene.

Hailing from Buffalo, NY, Head North has used this indie-influenced pop-punk to break out of the local scene and demand the attention of a national audience. Packing in sentiments as big as their sound, the band hits home with walls of guitar lines, frenetic punk rock drums and an emotional complexity anchored behind their lyrics. Singer Brent Martone hits raspy notes of anger and sadness, knowing when to shriek and when to soften, adding a layer of versatile energy to back up his passion. The band started out 2015 strong. Beginning their career as part of the Bad Timing Records roster, Head North released Bloodlines in March. Since then, the band has sold out of their first vinyl pressing, opened a tour with Have Mercy, Weatherbox and You, Me & Everyone We Know, and headlined a tour with fellow BTR members, Bonfires.