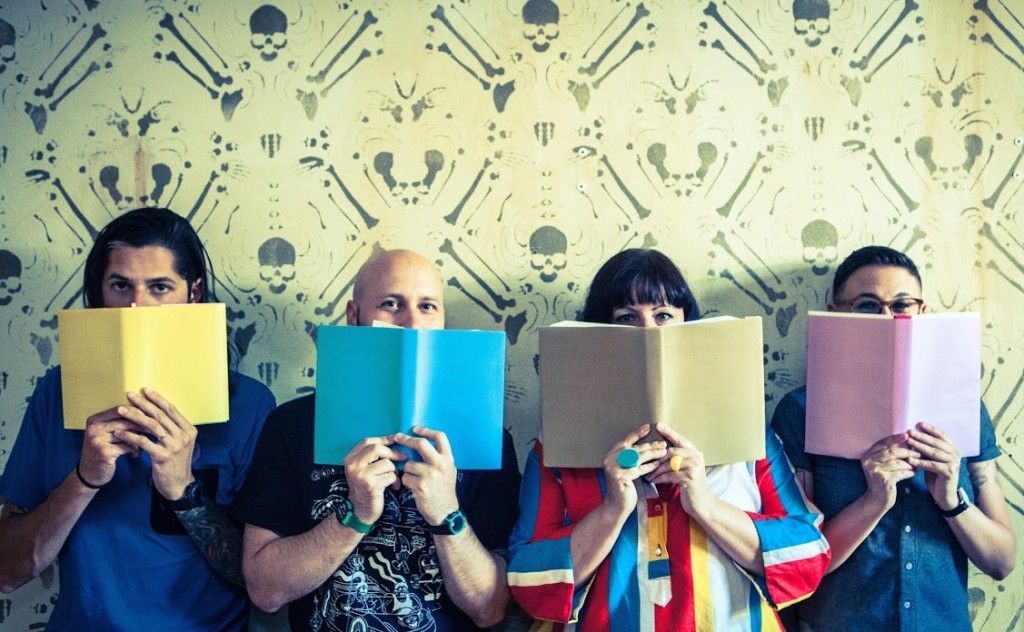 “If a tree falls in a forest and no one is around to hear it, does it make a sound?” Similarly what is a band without their fans?

Few music documentaries have better shown the personality of a band’s audience than “Heavy Metal Parking Lot,” a short film that humbly documents Judas Priest fans tailgating in a parking lot before Maryland’s Capital Centre concert in 1986. Filmmakers Jeff Krulik and John Heyn captured kids being kids in such an honest and endearing way that created a perfect time capsule of an era associated with heavy metal, regardless of one’s interest in that specific genre. Bootleg VHS copies of these 16 minutes were passed amongst music fans of all kinds for decades and was reportedly a tour bus favorite of Nirvana.

Positive No pay tribute to this legendary short with their video for “Pedal Through.” Here they parody the parking lot scene outside an indie rock show in the ‘90s that could just as easily be applied to today. These three minutes reveal an infectious pop song guiding a technicolor scavenger hunt of indie rock Easter eggs. There are practically a hundred subtle nods and tips of the hat to this DIY culture from the past three decades packed in here. While most of the props were created by or are actual artifacts from band membersTracy Wilson’s and Kenneth Close’s personal collection, the cast was also encouraged to bring or wear their own relics. Each gag is based from real show experiences, which include being paid once in oranges and the inclusion of a homemade Smashing Pumpkins board game (Pumpkinland) bassist Sadie Powers created in middle school circa 1997. Even an actual prop from the Sonic Youth “Dirty Boots” video is in there — a hand drawn merch table shirt.

Make fun of this world all you want, but let the record show, Positive No is laughing with you.

NPR Music premiered “Pedal Through,” the first single and music video from Positive No’s upcoming album Glossa. Speaking about the record and lead single, NPR shared, “Positive No’s debut album, Glossa, undeniably comes from the ’90s, with an ear for counter-intuitive melodies that pop in unexpected places. “Pedal Through,” in particular, has all the beefy weirdness of Polvo — but is, in the end, a winsome pop song that gets stuck in your head for days.”

More about the band:

As it turns out, Positive No isn’t really a band, it is a remedy.

Positive No started in the wood paneled confines of a living room in Richmond, Virginia. Songwriter and guitarist Kenny Close began home recording a series of songs over a Christmas vacation. These were shared with Tracy Wilson who in August of that year was hit by a car while crossing the street and was on a long path to recovery. While gaining the strength to be able to walk again and coping with a newly acquired brain injury, she began adding vocals to these songs. This creative process became an important distraction and therapy for Wilson. The intention was never to start a band but once the demo process began in the winter of 2011, the songwriting chemistry snowballed into a series of new songs the two wrote together. Drummer and friend Willis Thompson brought this duo to a trio and then after a series of bass players, this four piece band has been recently rounded out by Sadie Powers. After several years in the band Thompson recently left Positive No and James O’Neill has taken over his drum throne.

Their debut 5 song EP entitled Via Florum was recorded at Magpie Cage with J Robbins(Jawbox / Burning Airlines / Office of Future Plans) and was released on Wilson’s record label Little Black Cloud Records in 2013. The line up for this recording included Kenneth Close, Tracy Wilson, Willis Thompson, and James Menefee. A 7″ single was recorded for the Negative Fun Records singles club in 2014 (with bass player Andre Phillips) and in 2015 the band returned back to Magpie Cage to record their first full length record Glossawith the original Via Florum line up.

So where exactly did the members of Positive No come from? The band’s family tree is well rooted. Kenny has played guitar in a series of noisy indie rock bands from Virginia since the mid ’90s. Tracy was the singer in the ’90s post hardcore band Dahlia Seed (Theologian/Troubleman) but has also recorded under the solo moniker Ringfinger over the past 5 years (Magic Bullet Records/Little Black Cloud). Sadie Powers is a long time member of Richmond’s synth-pop group Dead Fame. James O’Neill is currently playing in two other bands, Snowy Owls (shoegaze) and Plain Scrap (think Hot Snakes). Positive No may have a confounding combination of styles in their songwriting background, but together they create melodic, unpredictable pop balanced with tension and energy. For those unfamiliar with the band’s musical pedigree it would be tempting to suggest they pay heavy tribute to a time when Velocity Girl’s singer was rumored to have eloped with the drummer of Sunny Day Real Estate (yes, that was real gossip from back in the day), but in fairness, half of this band has been making music since the mid ’90s and have influenced some of the musicians they have been compared to.

With Close and Wilson remaining the core songwriting team, the past year of creatingGlossa had its own set of challenges. This time it was Kenny with a seemingly endless string of health hurdles. A sprained foot appeared from thin air in August of 2014 and it spiraled into months of intense leg pain that led to difficulties in walking or standing (goodbye playing live performances). The pain mysteriously spread to much of his body, an X-Ray revealed a shifted pelvis and spine, and then Kenny collapsed in November in what looked like a seizure but was diagnosed as a Vasovagal response. During these 9 months of setbacks and slow healing, Glossa was written and recorded. Music once again provided a much needed emotional outlet and necessary diversion between doctor visits and PT.

Spring has arrived and at the end of this long dark tunnel comes 12 new songs and a truly refreshed band. Positive No is back and will be touring in the fall to support their new record.

Pre-orders are now available via Negative Fun on CD, cassette, and limited edition lyric/art book. Lyrics are the fuel behind these moody pyrotechnics and for this reason the band has created a 7” x 7” 26 page full color book. Band member and graphic designer Kenneth Close has produced a total of 12 unique art pieces partnered with the lyrics. In turn every song on Glossa has been treated like a short story worthy of its own book cover. For those who appreciate Factory Records or 4AD for the album art as well as the music, this small book (that also comes with a digital download to the record) will speak volumes. The meticulous attention to detail in the music, the words, and the packaging is staggering.