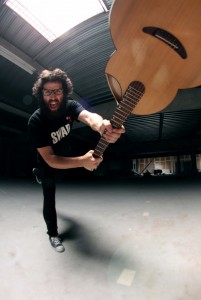 Stream A Track From Both Artists & Pre-Order Here: https://forestpooky.bandcamp.com/album/europe-2015

“[Blackie] reaches for the stars on every song, building walls of joyous sound that feel fit to bursting” – Rolling Stone
“[Forest’s] world settles in between two genres, which although pretty different from one another, share the same rage and passion: Folk and Punk Rock.”  – Musique Mag
‘Europe Tour 2015’ is a coming together of two of the finest, active, solo/acoustic musicians in the world – Peter ‘Blackie’ Black and Forest Pooky. Peter Black, hailing from Sydney Australia is best know as front man of The Hard Ons; Forest Pooky, from Lyon France is a modern day troubadour and one of Europe’s hardest touring musicians.

Featuring 3 brand new tracks from each artist, ‘Europe Tour 2015’ will be available on Orange 12″ vinyl and digital download on 4th September. The 12″ vinyl comes with a download code and pre-orders with an exclusive, collectible t-shirt plus artwork by Peter Black with lyrics, notes and selfies on the insert sleeve.

Commenting on tour Peter Black says “My 1st solo tour of Europe – I can’t wait!” with Forest Pooky adding; “I’m stoked and honored to release a split with Peter Black.The Hard-Ons are quite the legends. Sharing tours with other musicians is the best way to learn. Sharing Blackie’s experience is something I’m looking forward too. It’s taken a lot of time and effort, but in the end, the result will be so satisfying.”

Peter ‘Blackie’ Black has been playing in the legendary Australian punk rock band, The Hard Ons, since 1982. Pushed and encouraged by his band mates, he decided to give the solo ride a try. Although acoustic, his work is no less twisted, melodic or surprising. The songwriting is unique and his familiar voice will, once again, charm you, as it did with his full band projects. Extra vocals on Blackie’s track come courtesy of Nina Bellersheim and were recorded at Linear Recordings, Australia, by Wade Keighran and mixed and mastered by Chris Townend at White Light.

By contrast, Forest Pooky is a man that never stops. Originally hailing from Washington DC, Forest and his family relocated to France when they were young. Since the release of his album ‘Every Keyhole Has An Eye To Be Seen Through’ in September 2012, Forest has played over 450 shows worldwide. Wearing his heart on his sleeve, his brand of acoustic folk/punk – often accompanied on record with full band backing on previous offerings – is incredibly honest and true.

‘Europe Tour 2015’ sees Forest strip back to just him and his guitar in a very genuine manner. Undertaking his “Punk Rock Apprenticeship” as a member of The Pookies, a savage and rage filled punk/rock/hardcore trio. As anger was the driving force behind the band, The Pookies inevitably consumed themselves and combusted after just one album. Alongside his solo project, Forest is a member of pop punk trio, Sons of Buddha, with his brother Ed (UncommonMenFromMars/Not Scientists) and Pat (ISP). His tracks were recorded, mixed and mastered at NSR studio, la Garde Adhémar, France by Laurent Naffissi.

SONGS OF FARWELL AND DEPARTURE: A Tribute To HUM Announces Release Date Information