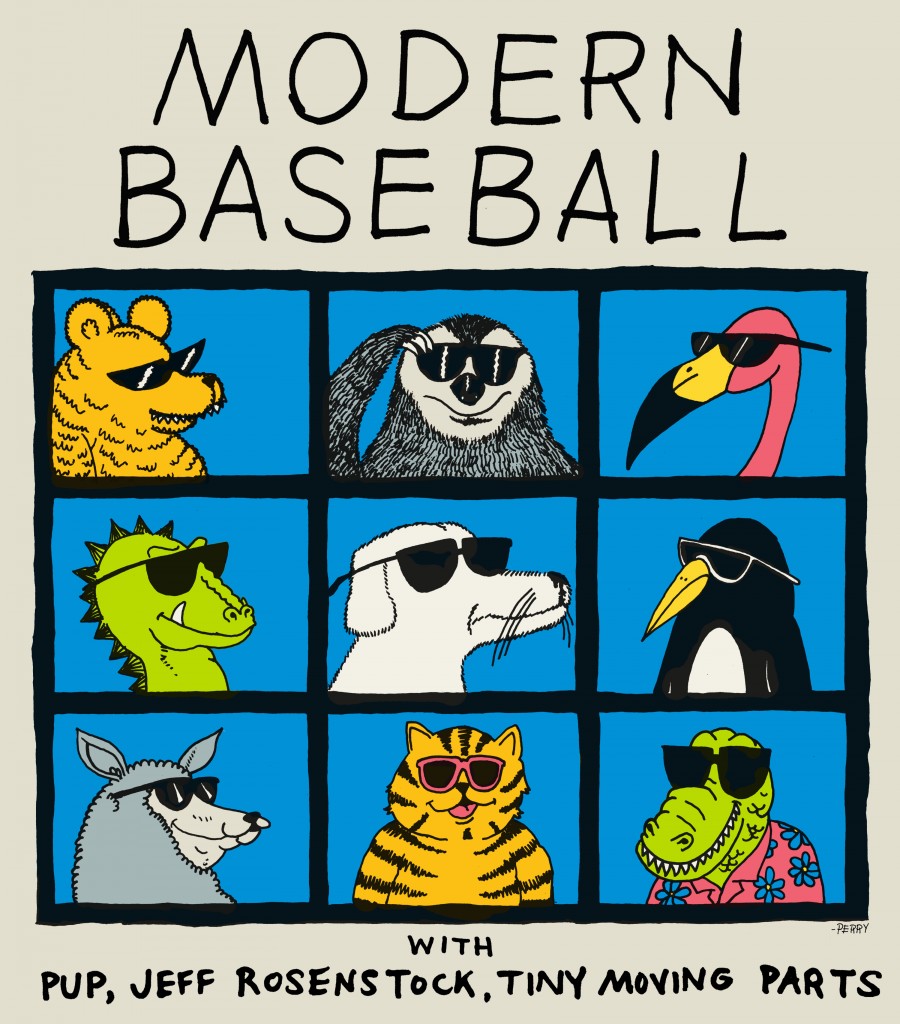 Pre-Sale Tickets on Sale Now
Include Download of a New Track!

Modern Baseball are excited to announce a headlining winter North American tour today with support from PUP, Jeff Rosenstock and Tiny Moving Parts (all tour dates below).  Pre-sale tickets for the tour are available now (http://modernbaseball.ducatking.com) and include a brand new Modern Baseball track “Revenge of the Nameless Ranger” that has never before been heard and is only available via pre-sale.  General on-sale will begin on Friday, August 14th at 12pm EST.

Philadelphia’s Modern Baseball have truly had an incredible past few years. Their 2014 sophomore album, You’re Gonna Miss It All on Run for Cover Records debuted at #84 on the Billboard charts, and received critical acclaim from a wide variety of outlets including  Entertainment Weekly, Pitchfork and Alternative Press. Mixed by Jonathan Low at Minor Street Recordings and mastered by Will Yip, You’re Going to Miss It All features 12 tracks that showcase the band’s signature witty indie-pop. Their Kyle Thrash-directed video for the single “Your Graduation” has over a million views, and the band has toured the US and Europe almost non-stop since the record’s release, gaining new fans across the globe. Formed in 2011 by friends and guitarists Jacob Ewald and Brendan Lukens, who were soon joined by Ian Farmer on bass and Sean Huber on drums.

Since last year’s release of PUP’s self-titled debut on SideOneDummy, this ferocious four-piece has truly taken the world by storm. They were listed amongst Rolling Stone’s Breakout Rock Acts of 2014, named one of Kerrang’s 20 Hottest Bands In The World Right Now and garnered nominations for two Juno Awards (Canadian equivalent of the Grammy Awards) and the Prism Prize (an award granted to the Best Canadian Music Videos of 2014). All the while, rave reviews of the album and their live show continue to flood in—Noisey declared the album “a perfect ten,” BrooklynVegan calls them “catchy, anthemic and raw as hell,” Consequence Of Sound boasted that “PUP make punk rock effortless” and even The New York Times included PUP as one of their picks for Best Albums of 2014.

Mixed and mastered by Jack Shirley (Tony Molina, Joyce Manor, Deafheaven), Jeff Rosenstock‘s latest record We Cool? on SideOneDummy embodies the same attitude of his days in the recently laid to rest collective Bomb The Music Industry all the while crafting his own twisted version of an indie-pop/punk hit. Riddled with regret and anxiety but cloaked in undeniable indie-pop hits, We Cool? serves as a new chapter in Jeff’s compelling and completely relatable story as documented in the upcoming film, NEVER GET TIRED. A week before it was released, Jeff put the album on Quote Unquote Records for free download/donations only. A strange move considering his recent signing to the first proper record label in his career but the album went on to outperform expectations, landing on the Billboard Top 200 and Heatseekers charts.​ ​Jeff Rosenstock has always had a penchant for keeping things weird and fun. He’s unapologetically himself always and We Cool? is no different.

When you hear about a band coming from nowhere, it’s a sure bet that very few of them mean it in the way that Minnesota’s Tiny Moving Parts do. The trio hail from the tiny town of Benson, which boasts a population of just 3,000 people, meaning that the three guys in Tiny Moving Parts have plenty of practice making their own fun – and it’s quite apparent on their sophomore record, Pleasant Living, on Triple Crown Records. Recorded by J. Robbins at his Magpie Cage Studios in Baltimore, Pleasant Living shows a band with an easy confidence, boasting sing-alongs alongside thought-out, mathy instrumentals.

Tigers Jaw Cover The Cure’s “In Between Days” For Devinyl Splits No. 3 With Kevin Devine‏