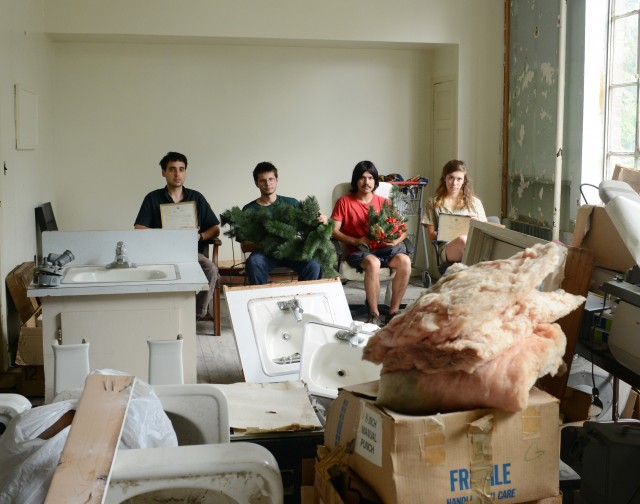 Touring with Warehouse in September

There are whispers in the underground: tales of a jaw-dropping live band making impossibly jagged yet sweetly melodic post-punk, stories of a quartet so incredibly tight you have to see it to believe it. The rumors are true. Inflated Records and Exploding In Sound are ecstatic to introduce you to Palm from New York’s Hudson River Valley. Trading Basics, the band’s full-length debut, is due out November 6th, but there’s nothing basic about it.

While the four-piece have made their home in the same Hudson scene as experimental art rockers Buke and Gase, Palm’s story started when guitarists/vocalists Kasra Kurt and Eve Alpert developed a musical kinship while attending the same high school. The pair decided to continue their education at Bard College and quickly founded Palm with drummer Hugo Stanley. Their earliest material was entirely instrumental and concentrated on the interplay between Kasra and Eve’s thick, mechanical guitar parts against Hugo’s sparse, loose drum phrases. Not long after that, the band added Gerasimos Livitsanos on bass and has refined its sound over the past few years with a focus on detail, density, and heaviness. With a palette informed by punk, metal, and noise as well as jazz and bossa nova, they utilize traditional rock instruments to create playful experiments that, using unpredictable time signatures, move up and down, back and forth, and all over the map.

Trading Basics challenges the listener’s expectations with moments of dissonance that are reigned in and precise. The pretty moments are often where the chaos is. Amid these constant and rapid changes, the band sneaks in an unrelenting, trance-inducing repetition. Recorded and mixed by Eli Crews (Deerhoof, tUnE-yArDs) at Figure 8 Studios in Brooklyn, the album is a confident statement that this young band has carefully crafted a unique sonic vocabulary and methodology during their short time together. Being somewhat removed from city life, and having access to a 24 hour practice space in Hudson, has resulted in an unparalleled level of discipline and focus on their craft. In addition to the new record, the band’s impending relocation to Philadelphia, and September tour with Warehouse, expect Palm to take their incredibly tight live show on the road in support of Trading Basics in the year to come.

“Palm’s mathy sound wasn’t developed just for the sake of seeming complicated, or proving their musical prowess. “We aren’t interested in making overly complicated music for the sake of itself. Every sound has to serve some sort of purpose,” she (Alpert) said. The record’s first single “Crank” screeches and swerves in and out of control before Alpert’s voice welds its erratic scaffolding together. Tension builds and drops-off at the lyrical apex”

Diving further into the record, Stereogum offered, “the songs on Trading Basics aren’t chaotic, but rather multi-tiered, ordered equations arranged through inventive improvisation. Palm’s song-structures are like fractals; an unending series of intricate patterns that, upon first glance, look like spontaneous and abstract renderings.”

Palm are set to bring their highly praised live show across the North East and Canada in September with Atlanta’s Warehouse (Bayonet Records). Dates can be found below.