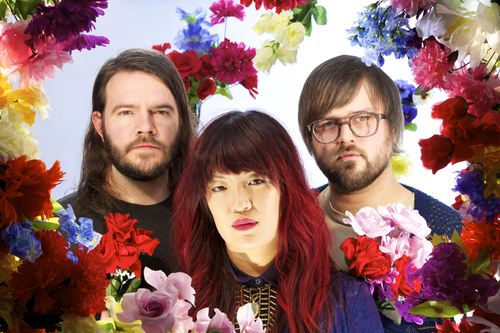 Eternal Summers
Reveal bonus track “Honey” taken from deluxe edition of album Gold and Stone, due out on 25 September via Kanine Records
First ever European tour in September with Surfer Blood and Pinact
“I’ve never thought too hard about what our albums should sound like before they are written. I just trust instinct to lead the way.” That is the philosophy of Nicole Yun of noise-pop, power-rock trio Eternal Summers. And if you haven’t heard of Eternal Summers, you’ll have a lot of catching up to do. On 25 September 2015 they will release their new full-length album Gold and Stone in the UK via their longtime label, Brooklyn based indie, Kanine Records (home to Fear of Men, Pinact etc).
You can listen to the new track “Honey”, which is one of two bonus tracks to be included in the UK Deluxe Edition of the album release. Of the song Nicole says: “I used to pride myself on writing cryptic lyrics that were so vague that a person could believe the song was about anything they wanted: love, money, their dog, a sandwich.  I realized I rarely wrote about a love relationship explicitly and I would never ever ever use the word “babe” or “honey” in a song- those words seemed like rock n roll clichés. Maybe it was conscious or subconscious that the lyrics for this entire album are more literal (perhaps more vulnerable) than before but “Honey” is a clear example of plainly voicing ones fears about the barriers in a relationship.  I was sad this particular song didn’t get on the original album, but am excited to still be able to share it now!”
In September the band will be touring extensively in the UK and Europe for the very first time, with dates supporting Surfer Blood as well as sharing the stage with labelmates Pinact (see full tour dates below). Nicole explains their feelings leading up to the shows: “We are excited and relieved to finally tour Europe!  It’s been amazing to keep up online with fans and supporters, but we are ready to finally meet these anonymous cool people as well as new friends for the first time!  Since this is our fourth album and only our first time in Europe, we are willing to take requests at shows for any of our older songs!  We hope to see Stonehenge at some point too!”
TOUR DATES

Having formed in 2009, the Roanoke, Virginia-based band started out as a two-piece, with Nicole Yun on vocals/guitar and Daniel Cundiff on drums, to be joined later by bassistJonathan Woods (they have now been a trio longer then they were a duo). Gone are the days of their hometown collective known as the “Magic Twig Community”, that saw the handful of like-minded indie artists working together; but what has grown in its place is a band that stands firmly on its own. In the words of All Music, “The kind that other bands will look to for inspiration 20 years later.”

Gold and Stone is their fourth album, following on from the crafty minimalism on their debut Silver, the dream punk sheen of 2012’s breakout Correct Behavior and the guitar driven power on The Drop Beneath, the evolution of Eternal Summers marks a band that embraces both anthemic rock and bittersweet ballads – a band that is grounded in jangle pop with a hint of shoegaze but with an added depth that rewards on repeated listens.

For Gold and Stone, Eternal Summers returned to Resonate Studio in Austin, TX, the site of last year’s well-received The Drop Beneath (where Pitchfork noted: “The Drop Beneath is the most pristine sounding thing that Eternal Summers have ever recorded” and “indulges their more anthemic side, and the results are solid.” According to Paste Magazine, “Their brand of loose-hanging, guitar driven, hook-filled pop has tightened into a fist.”). They are back into the very adept hands of engineer and mixer Louie Lino to create an album that ventures beyond the pop immediacy of their previous albums. Nicole says, “On this self-produced album, we wanted to target more lush and radiant textures, some classic rock riffs, some jazzier elements and some full-on punk snarl.”

Nicole isn’t exactly sure how influence happens, “Whether it creeps in or just bashes you on the head, I think we made it a point to be as open as possible. We love to listen to bands and think about how their albums came together. We were listening to a lot of Blur, early Radiohead, And You Will Know Us by the Trail of Dead, Echo and the Bunnymen, Ryan Adams, Lush, Dinosaur Jr., Cleaners from Venus and Stereolab in the van on tour before writing Gold and Stone.” You’ll have to give Gold and Stone a spin to see whether you can pick out those influences or even find traces of the early Eternal Summers “dream punk,” but regardless, it’s evident Eternal Summers shall not fade.