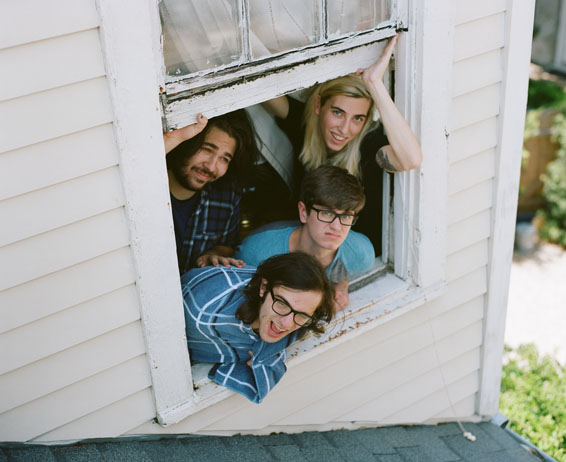 New Orleans indie-punks Donovan Wolfington shared a new video and track, “Sadhead” today from their upcoming sophomore LP How to Treat the Ones You Love via IMPOSE. The album will be released on Topshelf Records on August 21st, 2015.

How to Treat the Ones You Love is currently available for pre-order from Topshelf Records and Donovan Wolfington recently embarked on a US tour in support of the upcoming release (all tour dates below).

“A dark representation of painful events put in a pretty and crisp bow,” is how lead singer of Donovan Wolfington, Neil Berthier, would describe their new record. As a band, they have unfortunately seen their fair share of loss over the past couple of years but they didn’t always have a dark cloud following them around.  As a matter fact, they found great success with the release of their album, Stop Breathing (2013), and their EP on Topshelf Records, Scary Stories To Tell In The Dark (2014). Both releases offered a nostalgic punk sound with a southern rock charm, which created an impressively loyal fan base.

This southern charm is no surprise as the band is currently based out of New Orleans. Neil Berthier and Matthew Seferian (guitar/vocals) met in their freshman year of college where they discovered they both had a passion for music that extended further than jam sessions and the college scene. They joined forces and Donovan Wolfington was born.  Today, the band also includes Alex Skalany (bass) and Michael Saladis (drums).

It was right before finishing work on their upcoming album, How To Treat The One’s You Love, that these four young men had to face the harsh reality of love and loss. They had been recording in Kenner, a town just outside of New Orleans, when friend and studio owner, Rick Naiser, uncharacteristically called in sick.  What they thought was just a cold turned out to be myleofibrosis, a bone marrow disorder. Just two weeks later, Naiser passed away right before Christmas. The grief of losing a friend was intense and overwhelming but they continued to pour their souls into their music. The production of this album suddenly became about the band righting their wrongs and realizing their failings with the people they care most about.

How To Treat The Ones You Love, is an eclectic mix of genres that centers around the very themes the band experienced first hand, trust and love.  Though this album is rich with punk and metal, it still remains true to the Donovan Wolfington indie rock sound.  “Being in New Orleans and being around this culture has shaped us into better musicians,” Seferian explains, “playing bad here is unacceptable.”  This album pays close attention to detail and illustrates the journey of a band that took the time to grow as artists and become the best version of themselves. The record may be a “dark representation of painful events” but the outcome is an honest and raw example of how every experience can be molded into something uplifting.

ARCTANGENT LINE UP SPECIAL- 5 MINUTES WITH MEMORY OF ELEPHANTS