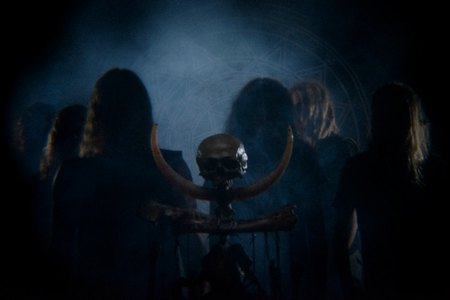 DARK BUDDHA RISING: NEW PSALM FROM FINNISH PSYCHEDELIC DOOM PRACTITIONERS; INVERSUM PREORDER BUNDLES NOW AVAILABLE
Inversum is the forthcoming new full-length from Finnish psychedelic doom practitioners, Dark Buddha Rising. Their fifth studio offering and first under the Neurot Recordings banner, Inversum is a two-track exercise in the black arts of psychedelia, swallowing its listeners whole into a tense, brooding realm of dark atmospheres, harrowing mysticism, tormented howls and slow, ominous riff protrusions. Considered the opening of the Third Cycle Of Dark Buddha Rising, the record was recorded, produced and mixed by the band in the bowels of the Wastement, the self-proclaimed “asylum of eternal feedback,” and welcomes the addition of new Dark Buddha Rising recruits, V. Vatanen (guitar, vocals), J. Saarivuori (keyboards) and M. Neuman (vocals).
As a precursor to its release next month, we’re offering up an edited version of opening psalm, “E S O.”   Comments the band of the sonic enormity at hand, “‘E S O’ is the inner process of Inversum, a personal voyage into the eternal current of existence.“
As the dust of centuries has settled on pages unwritten, the gates are opened only within. In ascension rites of introvert spirits, the signature of passing flesh is inscribed in the memorial garden as a note of entrance. Succeeding this initiation, all levels are accessible through death transpired as severance of the flesh and the spirit immortal.
As the remnants of flesh dance to the endless pulses of the multiverse, the underlying directives in biorhythms to which these pulses are synchronized (from ego to the universe on the left hand and no ego in the void beneath the veil) and to be followed like a call of nature. Nature withholds the void that exists to the unaided eye of the celestials, and the rhythms transpire as keys.
As the innerspace traveler is aligned with the order of the nine, disarray in the processes is suddenly reversible, and the liberated shall walk the brightened path that is not treaded afoot. This is DARK BUDDHA RISING.
INVERSUM TRACK LISTING