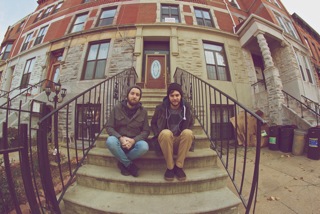 Originating from Northern Ireland and Australia, Aaron Barnard & John Gribbin met (and are still based) in Brooklyn, New York. Following a chance meeting in a New York coffee shop, the cross-continental duo drew inspiration from their surroundings. Writing and producing from their Bedford-Stuyvesant studio, they have crafted a sound that is widely categorized as “downtempo indietronica”. In January 2015 they released their debut single “Take It In” with much approval amongst the blogosphere. This brooding yet melodic tune drew comparisons to Alt-J & Glass Animals and the music video took hints from Jungle’s smashing visual works.

After releasing their 2nd single “Rough Tide” to similar success in early May, it was evident that the time was right to unveil more of their work. Tamper released their 4-track debut EP in June and have gained over 70,000 plays on SoundCloud in one month alone! With over 30 features from music websites ranging from small to massive, recognition for Tamper is growing at a rapid pace.

The duo have no plans of slowing up and soaking in the success as they have just put the finishing touches on their Summer Cover Series. This 4-track compilation is a genre-spanning selection of tracks as the likes of Santigold, Brand New, Foals & Local Natives have all been re-worked. Simply covering the songs was not enough for John & Aaron though – They also pushed their limits and produced music videos for each one of them.

Tamper is planning to finish out 2015 just as strong as they started it with their third and final project, their 2nd EP. This time around, the EP will feature 5 songs and it is currently being mixed to perfection at locations across Brooklyn.