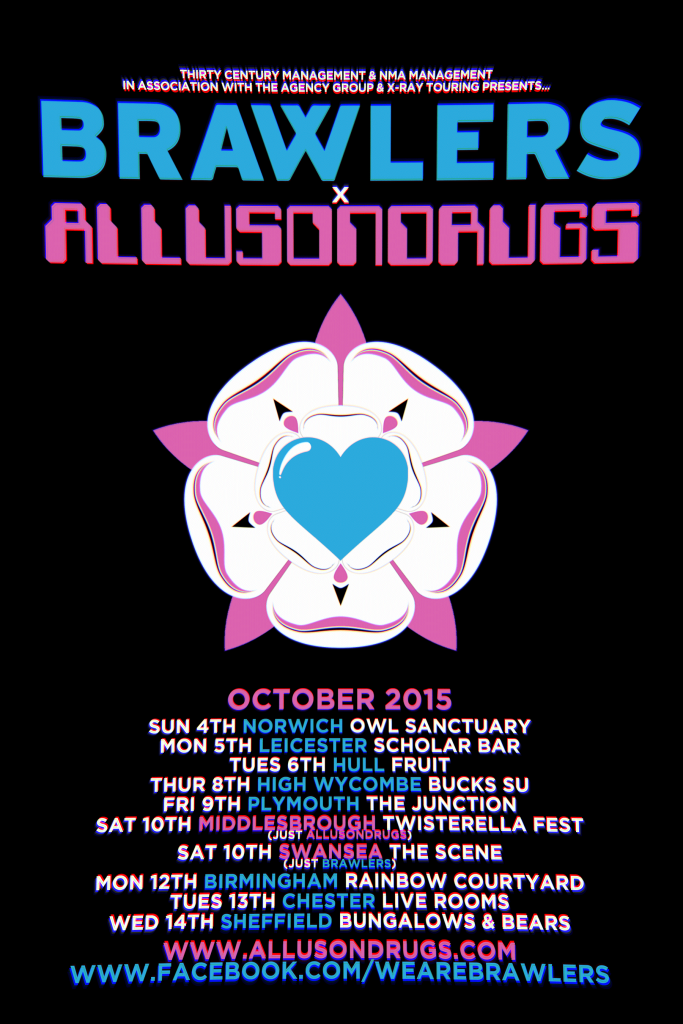 The video can be found here for your viewing pleasure:

Alongside the news, the band are also proud to announce a partnership with the excellent folks at Too Pure to bestow upon the universe a double-A-side 7” single in September. This attractive slab of purple vinyl contains the tracks ‘Magic College’ and ‘Her Crown’ which were recorded in the band’s hometown of Castleford, Yorkshire in June of this year.

Allusondrugs have thus far released a brace of download only singles, a CD / digital EP and a handful of hand-painted super-limited-edition single releases (now long gone and much-sought-after) and are pleased to add a Too Pure Singles Club 7” to the catalogue.

On the live front, the band can reveal they will head out in October 2015 for a short co-headline run with fellow Yorkshiremen Brawlers and currently working on headline UK live dates for autumn / winter 2015, which will appear shortly over at http://www.allusondrugs.com. Dates for the October shows can be found below, tickets are on sale now.

Commenting on the news, the band say; “We’re looking forward to having a load of stuff on the go after a summer leisurely rolling around the festivals. It’s going to be so good to be out around the country with fellow Yorkshire boys Brawlers too, and our first ever vinyl release! Amazing!”

Allusondrugs formed in the summer of 2012. Since then, their very individual take on a melding of psych-pop-shoegaze-grunge has caught the eyes and ears of the likes of Kerrang, Rock Sound and Radio One, as well as live audiences across the UK.

Late 2014 / early 2015 saw the band beginning to build a solid fan-base following high-profile support tours and shows with Enter Shikari, Marmozets, Lonely The Brave and Pulled Apart By Horses. An extensive period of headline touring through April / May 2015 and a packed festival season across the summer has only seen the buzz continue to build.

Tickets are on sale now at http://www.allusondrugs.com