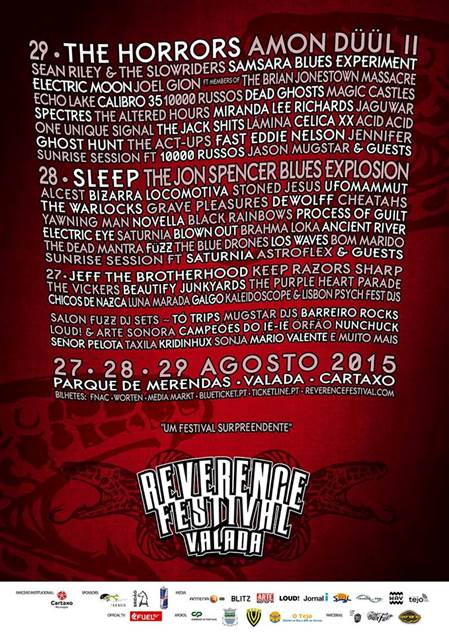 On August 27th, 28th and 29th Reverence festival returns to Valada, Portugal, to offer up another weekender of quality psychedelia. This monster line-up showcases the very best in stoner, grunge, shoegaze and doom, with more acts to be announced in the coming weeks.

Heady, hazy sounds offer the perfect summer soundtrack to the beautifully picturesque setting of Valada and when the sun sets, kaleidoscopic lights and psychedelic visuals will adorn the stages, adding an aesthetic accompaniment to the mind-expanding aural delights, which will run all night long. Reverence Festival is somewhat of a marathon, where hardcore fans can bask in Valada’s Summer heat as late as 6am. This year they’ll debut their ‘Sunrise Psychedelic Jam’ which will see members of various bands on the bill play together while the sun rises over the river.

UK psych breakthroughs The Horrors headline with Californian doom legends Sleep, at two ends of this hyperspecific spectrum, these giants of their genres perfectly summarise the Reverence sound pallet.

French post-rock heroes Alcest also star at the top of the bill next to Amon Düül II, the German outfit largely considered to be one of the founders of the Krautrock scene and a seminal influence on its development. It’s with bands like these that not only proveReverence to be multi-cultural in their tastes, but also true to the scene in which they’ve mastered.

Ex Brian Jonestown Massacre, Joel Gion & The Primary Colours also head up the powerhouse weekender with transcendental psych soundscapes and blistering walls of feedback, whilst Ukrainian rockers Stoner Jesus dish up their own divine take on the genre.

Aiming to capture the spirit of early, pre-branded and pre-corporate events, Reverence harks back to the golden age of free spirited festivals, where the music comes first. A labour of love.

The festival features a variety of cult bands that have been bought together not purely for profit, but because a group of promoters wanted to bring something to Valada for the fans.

This year Reverence have teamed up with ‘Sleep Em All’, an up-market Portuguese camp accommodation company who specialise in tee-pees and luxury camping facilities. They will be taking over a one acre area of the fifteen acre campsite with luxury tents and caravans, which will be available for €11 to €17 per person per night.

Valada is a small picturesque village, in the heart of Cartaxo, famous for agriculture and wine production. Often considered the wine capital of Portugal, Reverence are celebrating by having the local produce available all weekend. Located approximately 60kms inland from Lisbon and 550km from Madrid, easily accessible via train from Lisbon where shuttle buses will be running from nearest station Reguengo to the festival site.