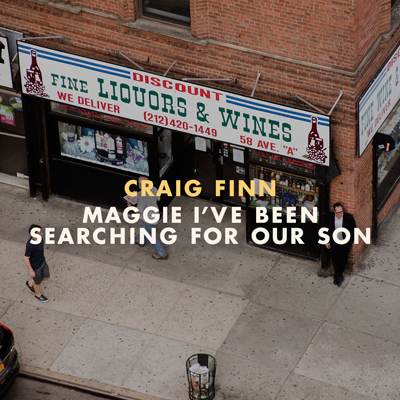 CRAIG FINN
NEW SONG ‘MAGGIE I’VE BEEN SEARCHING FOR OUR SON’
FINN ASKS FANS TO MAKE OFFICIAL VIDEO
NEW SOLO ALBUM ‘FAITH IN THE FUTURE’ 11TH SEPTEMBER 2015
Craig Finn’s new song ‘Maggie I’ve Been Searching For Our Son’ has premiered on WSJ.com. ‘Maggie I’ve Been Searching For Our Son,’ is now available for download at iTunes and is the second song released from Finn’s forthcoming solo album ‘Faith in the Future’ out through Partisan Records on 11th September.
‘Maggie, I’ve Been Searching For Our Son’ is described by Finn as “really just about someone who’s been flailing around spiritually looking for answers, trying to make a connection before time runs out.” About the song, The Wall Street Journal noted “[‘Maggie’] is full of the richly detailed lyrics that the singer has made a specialty in a career that began in the 1990s with his Minneapolis band Lifter Puller.” Check out the song below:
Last week, Finn reached out to his fans asking for their assistance in creating the official ‘Maggie…’ video. The song’s lyrics were made available in advance, with Finn encouraging them to put together short clips that will be collected and edited to create the official music video for release in the coming weeks.  His humorous video appeal to fans can be viewed here:
https://www.facebook.com/CraigSteady/videos/vb.351315861545294/1069046486438891/
Josh Kaufman produced ‘Faith In The Future’ in the cosy, rustic confines of Woodstock’s The Isokon recording studio and helped Finn stretch the boundaries of his songwriting with confidence, invention and ambition to realise what will be a defining moment in his career.
At times stark and spare, at other times vibrant and dynamic, ‘Faith in the Future‘ is Finn’s most compelling collection thus far, each song a powerfully alluring and subtly nuanced composition wedded to his distinctive short story narratives. Much of the material on ‘Faith in the Future’ was written after the passing of Finn’s mother and, while none of the songs directly address that loss, the themes of perseverance and finding redemption can be found throughout the album.
“I had both the music and lyrics to these songs, though they changed a great deal in the studio,” Finn explains. “There’s a grandness to The Hold Steady that tends to make me write about bigger, more dramatic themes. Some of these songs are more mundane, with minor slices of life that wouldn’t best be supported by the hugeness of a rock group. It wasn’t always about what we wanted to put in, but what should we leave out? We didn’t want to sermonise or moralise. Just let these songs, and characters, be.”
PRE-ORDER ‘FAITH IN THE FUTURE’:
iTunes: ptsnre.co/FaithInFutureiT
Amazon: http://ptsnre.co/FaithinFutureAmazon
Partisan webstore LP/CD: ptsnre.co/FaithInFuture
www.twitter.com/finninthefuture
www.twitter.com/SteadyCraig
www.instagram.com/finninthefuture
www.facebook.com/CraigSteady