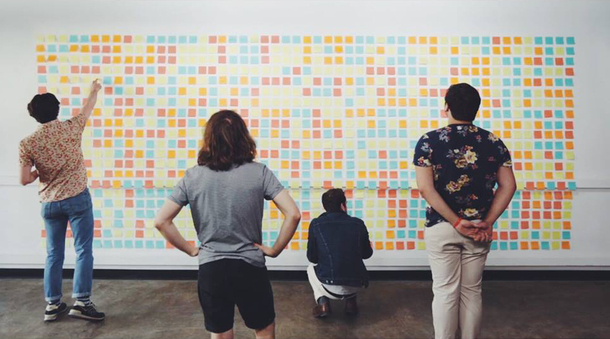 The Elwins Release New Video For Single ‘So Down Low’

The Elwins release a new mind-bending stop motion video for lead single “So Down Low“. The track’s exuberant energy is perfectly rendered by thousands of Post-It notes. The video is the first single off of their 2015 LP Play For Keeps, out now on Hidden Pony. Taking the best bits of pop and rock music from the past five decades (despite the guys having only been alive for a little over two), The Elwins have delivered a dose of dancy bliss that appeals to virtually anyone. The new video is another reminder of the band’s never-ending creative well, a relentless vitality that cannot be contained. Pushing themselves as far as they can.
In the most entertaining way possible.
Quote from director Alan Poon:

“The Elwins had seen some of my past work for Zeus and Broken Social Scene and asked me if I could help them make a stop-motion animated video that used Post-It notes – that was their only guideline! They were super-keen on participating and they had done a little stop-motion piece before, so I was happy to get them involved and create something with their participation as much as possible. The video starts simple and gradually moves to something much more complicated; each moment raising the bar on the last. The huge grid you see at the end uses over one-thousand Post-it notes to create the final animations!

The band was great to work with and came up with many of their own ideas and even performed in the video using a stop-motion technique called “pixilation” whereby we animate them frame-by-frame to make them slide across the floor and other fun but impossible moves. It was a really special video to work on and I think the results reflect the band’s energy and enthusiasm for creating all things with a fun and unique quality to them.”

I Have A Tribe Shares new track ‘Scandinavia’