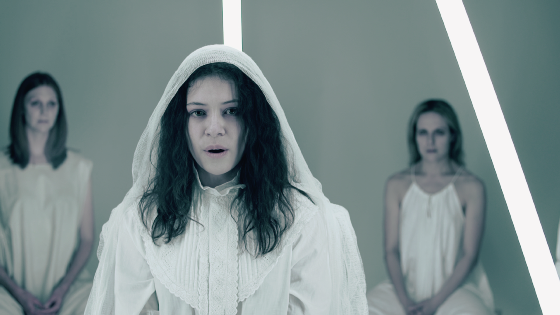 “An unpredictable and expertly-crafted album by an artist at his peak” – London in Stereo
“Wonderful” – 8/10, NME
“‘Bones’ is haunting, arresting, and unlike anything else.” – DIY
“Bones is a remarkable, chameleonic entity” – 7.5/10, The Line of Best Fit
“There has always been a gloomy beauty about Ryan Lott’s work & this darkly-lit electronic beauty is at the heart of Bones” – 4/5, The Irish Times
“An album remarkable for its musical diversity and emotional intensity” – 4/5, Nothing but Hope & Passion
“It’s clear that there’s a bone fide pop songwriter buried beneath the extravagances. Luckily for us though, Son Lux veers away from the straight forward and chooses to make records as wonderfully complex as Bones” – 8/10, Drowned in Sound

Following the release of their new album ‘Bones’ last week via Glassnote, SON LUX today unveil the video for “You Don’t Know Me” directed by Nathan Johnson and created by The Made Shop, who have collaborated with Son Lux for all of the record’s visuals. The video stars Tatiana Maslany (Orphan Black) and Noah Segan (Looper).

Of the video, director Nathan Johnson said, “When Ryan first sent the album over to The Made Shop, this was the song that I kept coming back to. It touches a pretty raw nerve, and we wanted to explore the song in terms of the empty rituals we often see in relationships and, to a larger degree, religion.

We wrote the video specifically for Tatiana and designed everything around her performance. She’s such a phenomenal actor, and she brings something so compelling to the role – this powerful figure who is stuck in the vacancy of routines that have lost their meaning.”

The Made Shop is a small design shop specializing in graphics, visual installation work, and film. They recently partnered with Son Lux to conceive and direct all the visual elements of the band, from the creation of the album cover to the music videos, artwork, and live shows. Their work has been featured in film, print, television, and is currently showcased in Yoko Ono’s retrospective at the Museum of Modern Art in New York.

The band is currently on a US headline tour and will head to the UK for Visions & Green Man Festivals in August, before returning for a full European tour in October. Full dates below.