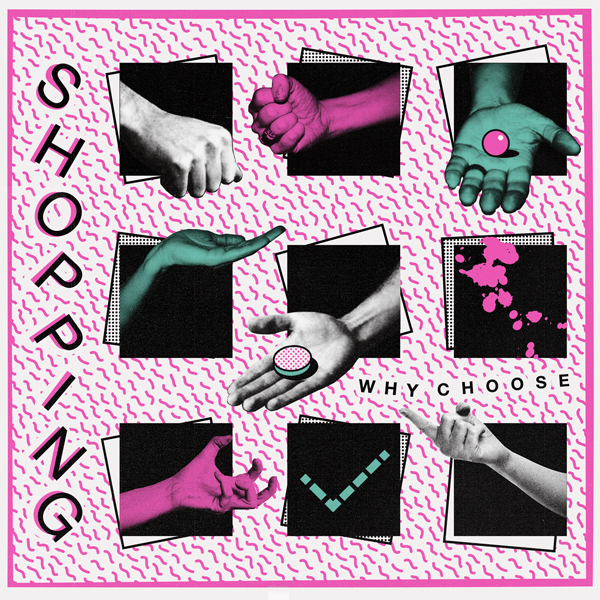 Formed in East London in 2012 by members Rachel Aggs (guitar), Billy Easter (bass) and Andrew Milk (drums), SHOPPING forge an itchy, angular explosion of propulsive bass lines, primitive disco-not-disco drums and guitar lines sharp as broken glass. Having done time in a plethora of UK DIY bands including Trash Kit and Wet Dog, they draw from a well of late ’70s / early-’80s post-punk with a voraciousness seldom seen these days, bringing to mind the jagged aggression of Gang of Four, the pure, raw yelp of The Slits and the dance-inducing thrust of Delta 5, The Au Pairs and ESG.

The band released their debut album Consumer Complaints in November 2103 on their own Milk Records, and personally hawked around UK indie stores (where it quickly sold out of its 1,000 pressing). The LP drew a flurry of press for their spot-on divining of post-punk’s driving force, seeing them dubbed a “band you need to hear” by NME and “Artist To Watch” by SPIN. Pitchfork wrote that “the fragmented shout-it-out hooks, pin-prick guitar lines and ramshackle rhythms… sound like they were captured live off the floor in the BBC’s Maida Vale studios sometime in 1981,” noting that “they never sound particularly dated or like a carbon-copy, a testament to the group’s song writing abilities.” Rather, Shopping embody the spirit of experimentation, social upheaval, (without becoming didactic) clashing gender politics and ethical change that defined their 70’s counterparts and still ring true today.

On their brilliant new album WHY CHOOSE, their debut for FatCat, the band teams up again with Jamie Grier, who mixed and mastered their debut, this time placing Grier in the recording chair at Glasgow’s Green Door Studios, while mastering duties fall to Alan Douches (Japandroids, Animal Collective, We Were Promised Jetpacks, etc.)

Tracked just before Xmas, the album was edited and mixed in January and February 2015 and is set for release on October 9th. WHY CHOOSE retains the urgency, bite and the bristling, shard-syncopated rhythm-hooks of its predecessor, expanding their palette with the addition of synths on several tracks and seeing vocal duties switched between members. With the majority of its thirteen tracks clocking in at under two and a half minutes (running to 34 minutes in total), the album is lean and precise, powering forward on a relentlessly kinetic, infectious energy and leaving the listener craving more. Spiky and jittery, its angular funk groove pulls off the neat trick of meshing an edginess with an ultimately huge sense of fun.

Onstage Shopping are a blisteringly energetic, taut and utterly engaging live act. The 405 wrote that “Shopping ignite coals beneath your toes that make you want to gyrate”, whilst The Quietus noted how the band “have a life-force all of their own…. you can’t help but move to this music”.

The band have recently completed tours with Merchandise and fellow post-punk outfit Golden Teacher. Upcoming dates include shows with ESG, Priests, Ought and a US tour with Shannon and The Clams.

The band say of the new album, “We wanted WHY CHOOSE to have the same feel as our first album but with an even sharper edge. Our main focus was still to have fun and write some songs that would get people dancing but there is also a darker undertone to this record – mostly we are singing about rejection, frustration, fighting, fleeting relationships, wasting time and losing money but there is also a kind of wildness and fun – a liberated freak out of a shopping spree that we really hope people can identify with.”