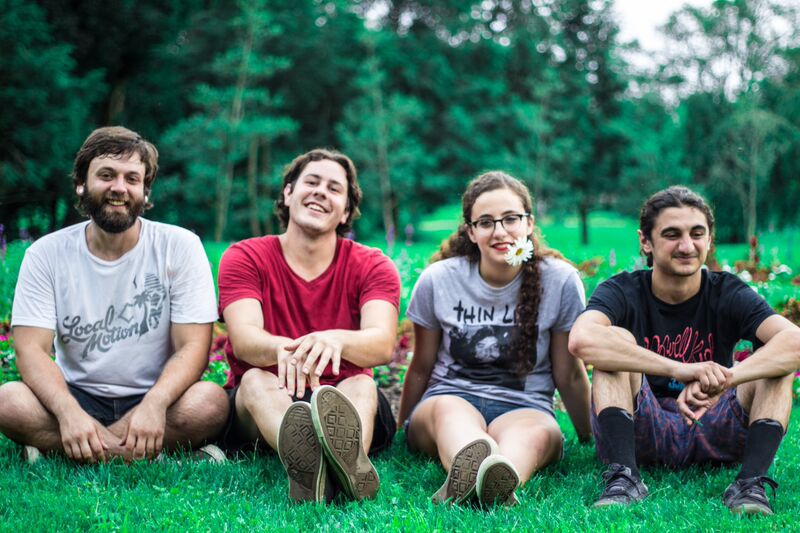 Sorry, Not Sorry 7″ Coming To Bad Timing Records This Fall

Bad Timing Records is excited to announce they have signed New Brunswick, NJ punk driven indie-popers ROMP! ROMP released their spectacularly refreshing debut EP Sorry, Not Sorry late last year, delivering a string of pop songs that drip with raw anger and emotion. Bad Timing Records will be re-releasing this EP in the fall digitally and as a 7″ with a soon to be announced bonus track. The original EP can be heard on ROMP’s bandcamp.

Following the release of the 7″, ROMP and Bad Timing Records will be releasing the band’s first full length. Details coming soon!
ROMP will be heading out on an east coast tour this August. A full list of upcoming dates can be found below.

Since that happenstance meeting, the group — Klarer, Dalakian, drummer Mitch Gollub and bassist Chris Beninato — have embarked on a quest to “play every New Brunswick basement” possible, seemingly a rite of passage for any New Jersey-based punk band worth their salt. They’ve also delivered their self-proclaimed “angry pop music” in spades on Sorry, Not Sorry, their debut EP. Originally self-released in October 2014, the EP now sees a rerelease from Bad Timing Records.
Sorry, Not Sorry might only span four tracks, but the EP’s songs truly run the gamut — from the unpretentious alt-pop of “Drive” and raucous riot grrrl-leaning “If Your Head Gets Any Bigger You’ll Float Away” to the Rilo Kiley-inspired “Portrait” and the remarkably mature sentiment laid out on the title track (“Saying sorry doesn’t mean we were wrong/We’re just learning how to better ourselves.”).

Produced by Jesse Cannon (Man Overboard, TKTKTK), Sorry, Not Sorry is the band’s first introduction to the musical world, but it’s already drawn rave reviews from fans, allowing ROMP to travel as far as New Orleans to win over audiences with their playful, undeniable pop- and punk-flecked sound.

It also launched ROMP into a slot opening for fellow New Brunswick band (and personal heroes) Screaming Females in early 2015 — traction that should serve the quartet well as they ready their debut full-length, due out later this year on Bad Timing. The band promise the new album won’t be a total departure from Sorry, Not Sorry but admit they’re excited to expand their sound into something a bit more aggressive that’s also “loud and articulate.”
But don’t worry, this slight sonic shift won’t affect the band’s outlook on their art or life in general: “Music is what we take seriously and put a lot of time and thought into,” Dalakian explains. “With everything else in life, we like to kick back, drink a lot of beers and hang out.”
“We’re just a group of people who loves creating new things,” adds Klarer, a student at the Fashion Institute of Technology. “We’re constantly doing it, whether that’s for ROMP or something else. Music, art or anything else — it’s what we love.”
https://www.facebook.com/ROMPistight
https://twitter.com/rompistight
https://rompistight.bandcamp.com/