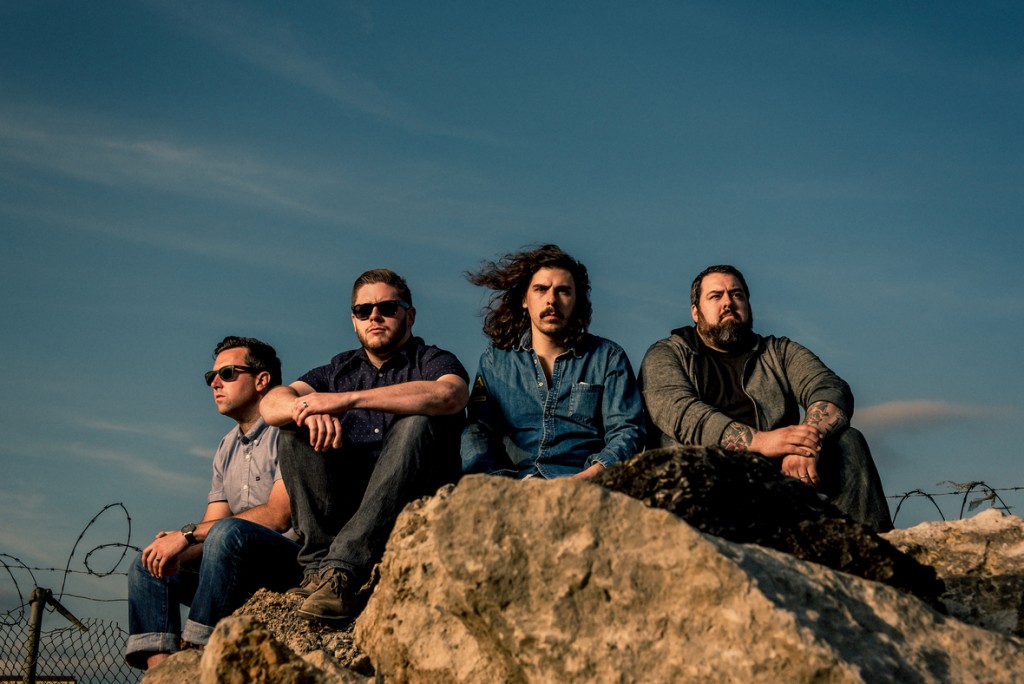 “It evoked an image in our heads of an isolated place separated by water from an already cold and isolated place [Alaska],” says Adam Staszewski. “The mood and sound of the album is also a reflection of the name [Kiska] — heavy, majestic, desolate, and ominous,” adds his brother Owen.

Off the coast of Alaska lies the Aleutian Wilderness, a chain of sixty four volcanic islands which form the northern cap of the Pacific Ring of Fire. Toward the western end of the chain, you will find Kiska — a small, isolated, and unpopulated land mass, noted mostly for its shipwrecks, bomb craters, and active stratovolcano. Despite its rugged history, a ceaseless pounding from both man and nature, the island itself remains unfathomably beautiful.
When it came time to name their band, Philadelphia-natives Owen and Adam Staszewski (vocals /guitar, respectively), Ean Kyler (bass), and Adam Francois (drums), felt a strong connection with the existence of this island.

“It evoked an image in our heads of an isolated place separated by water from an already cold and isolated place [Alaska],” says Adam Staszewski. “The mood and sound of the album is also a reflection of the name [Kiska] — heavy, majestic, desolate, and ominous,” adds his brother Owen.

Heavy, majestic, desolate, ominous. There are no beter words to describe Kiska’s self-titled, debut release. Leaving behind the more radio-friendly leanings of the quartet’s former band, Desoto Jones, the musicians reinvented themselves with Kiska, pursuing a heavier, more dynamic, and frenetic direction.

“Everything we’ve done in the past has shaped us,” says Staszewski. “Our past successes, mistakes, and missteps have all contributed to what we really wanted to be doing musically. We wanted to write an album that would speak for our new identity as Kiska and be a cohesive set of songs. It is really exciting to be a new band without dragging ten years of history behind us.”

In comparative terms, sonically the record falls in the general vicinity of bands like Jawbox, Failure, Rival Schools, and Hum — driving, dynamic, and aggressive, but with clean and resounding choruses. A delicate balance of space, power, grit, and color.

“We did our best to consider the role of all the instruments within each song,” says Staszewski, “as a four piece, we felt that each part was completely integral to the aesthetics of the song as a whole.” This palpable sense of simplicity gives Kiska the necessary breathing room to explore a full
range of dynamics — both musically and lyrically. While listening to the record, many curious lines (ex: “the earth is no place to be,” “am I dead or sleeping,” “your soul is too cheap to sell”) are presented as glimpses into an existence beyond our own.

“I’ve always had an interest in unexplained phenomena,” explains vocalist Owen Staszewski, “evenas a child, but it wasn’t until I got older that I realized there is something really big at play. These ideas of being unwilling pawns in an interstellar drama are woven thematically into the record —that combined with a sense of social unravelling, spiritual self-questioning, and the endless
endeavor of liberating oneself of the ever destructive human ego.”

Heavy ideas tackled on a heavy record — a formula reminiscent of a legacy of noisemakers from all eras.