Ought to release new album ‘Sun Coming Down’ on September 18; Listen to the new track ‘Beautiful Blue Sky’‏ 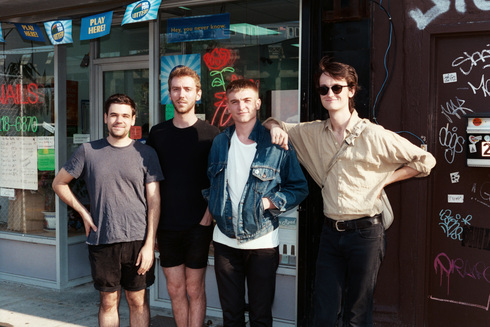 OUGHT TO RELEASE NEW ALBUM SUN COMING DOWN ON SEPTEMBER 18;
LISTEN TO THE NEW TRACK ‘BEAUTIFUL BLUE SKY’
Ought returns with their second full-length album Sun Coming Down, following a break-out year for the Montréal based rock quartet that saw its 2014 debut More Than Any Other Day make well-deserved waves for its blend of authentic, anxious, controlled and restive energy, with a Best New Music nod from Pitchfork and appearances on a wide range of year-end lists.
Having spent most of 2014 on the road vitalizing audiences with no-nonsense post-punk and the feverishly observational testifying of singer/guitarist Tim Darcy (who officially changed his name from Tim Beeler this year), Ought settled into a long harsh Montreal winter hibernation, spending the first few months of 2015 writing, playing the occasional local gig, and eventually heading back to the Hotel2Tango recording studio in the spring to lay down a batch of fresh tunes.
Sun Coming Down maintains the band’s tight, twitchy and economical sound, with the unfussy, understated rhythm section of drummer Tim Keen and bassist Ben Stidworthy anchoring Tim Darcy’s electric guitar and Matt May’s fuzzed-out keys (sounding, as often as not, like a second guitar). Ought pursue an artistically apposite austerity in committing these new songs to tape, referencing the arid and unvarnished production of no-wave and early indie rock while balancing carved-out angularity against an evolving comfort with textural coalescences and measured pacing. It makes for an album that’s consistently, insistently propulsive but also feels unhurried and pleasantly unhyped. Songs like ‘Beautiful Blue Sky’ (already a fan favourite from live shows) and ‘Never Better’ unfold with gradual and deliberate ebb and flow, where scratchy guitars play like dappled shards of light on gently roiling waves of bass and organ; ‘The Combo’ and ‘Celebration’ keep things crisp and concise. Darcy’s voice and lyrics continue to distinguish and define the personality of the band: his blend of ironic detachment, declarative insistence, fragmentary stammering poetics, and the occasional direct aside to the listener, finds various ways to weave within or drive through the mixes.
Sun Coming Down confirms the distinctive vitality and purposive naturalism of this band; Ought resists facile primitivism and overhyped dynamics in equal measure, keeping things hermetic but never airless, ascetic but never dispassionate, literate but never prolix.
The band’s steady and subtle charms don’t make them the cool kids or the iconoclastic freaks – just a satisfyingly unrefined and substantive rock band that eschews indulgence or aesthetic bandwagoneering to seek a humble, thoughtful corner from which to articulate a position within and contribute meaningfully to a 40-year continuum of indie, punk and DIY tradition.