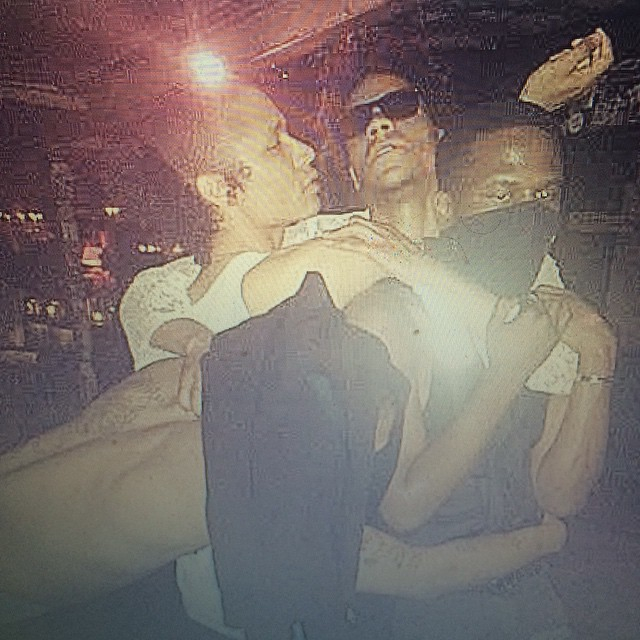 Out September 18th, Dogfood Music Group / !K7
Dogfood Music Group is the new label founded by musician, performance artist, activist and journalist Mykki Blanco: a new imprint of !K7 that was first born out of live performances and sets out to give voices to the underground artists that inspire their communities, contribute to and share Mykki’s artistic vision, and transcend conventional cultural boundaries / constructs.

The first DMG release is C-ORE, a new compilation project that combines three members from Blanco’s creative community: Yves Tumor, PsychoEgyptian and Violence. These multidisciplinary artists, along with Blanco himself, combine to deliver a cohesive album and statement of purpose for Dogfood Music group.

Blanco explains his vision in his own words,

“We are a group of friends who have created a release that represents a slice of what we’re into, our culture and what we want to show the world. People all over the world are only fed this singular image of “African American Music” and we want to disrupt that. We all come from backgrounds outside of the black American norm, and the world deserves to see our culture as much as anything else.”

At its C-ORE, the project is living, breathing, moving, multiplying and spreading wildly in all directions. Incorporating rap, punk, noise, industrial, grime, and many other elements, the compilation evokes a cathartic reaction from the listener, illuminating the diverse influences, imaginations, and hunger that drive the artists.

Because the live element is so integral to the DMG ethos, all the artists involved set to create immersive and challenging live works that go beyond the typical experience of listening to music digitally or attending a conventional concert. The goal is to present releases that also have the potential to function as an easily transmutable “happening.” As a performance artist, Mykki intentionally focuses on fellow artists whose musical practice is closely intertwined with their live show, and Dogfood Music Group seeks to create site-specific installations to perform in, with purposefully nonlinear narratives that actively engage the listener and audience. C-ORE is a concept meant to be both to be heard & seen, and the full Dogfood Music Group will begin touring this fall.

Joining DMG is Yves Tumor, one of the many alias that composer and multi-instrumentalist Rahel Ali employs. Tumor first linked up with Mykki in 2013 for an extensive Europe & Asia tour. His contributions range from the dynamic noise engulfing offerings of the “Histrionic” tracks, to the ghostly hip-hop of “Childish”.

Next up is Violence, a US-based electronic music project and founder of Palmtrees Caprisun. Violence is a multi-instrumentalist, composer and producer known for his complexity and eclectic stylistic shifts. The C-ORE compositions explore the technological overstimulation of a proto-human archetype, spoken through hard body grime and charged flows.

Devin Kyle Cuthbertson aka PsychoEgyptian aka hOla zygOte is a multidisciplinary artist from Brooklyn, NY.  Under his various aliases, Cuthbertson seeks to break down the limits of music and visual art. hOla zygOte is a self-fashioned black anime star from the cyberspace of PsychoEgypt. He is a revolutionary on a mission sent to level the playing field and disturb music; to reactivate the primordial & technological – the gods inside the machines – in order to reunite us with a total vision of Ecstatic Life!

C-ORE will be released September 18th on CD, LP and digital services.