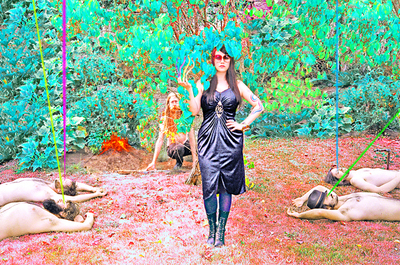 MIDDAY VEIL TO RELEASE NEW ALBUM THIS WILDERNESS ON BEYOND BEYOND IS BEYOND RECORDS, 11 SEPT, LISTEN TO THE NEW SONG ‘BABEL’

Midday Veil‘s third album, This Wilderness, is due for release on September 11th – their first on Brooklyn indie label Beyond Beyond is Beyond. Somewhere among the sonic synchronicity that binds together the forty-two minutes of Midday Veil’s animated and eloquent new album This Wilderness, attentive listeners will be struck by the realisation that the human organism embodied by the listener is an integral part of an interconnected ecosystem.
It’s a realisation about self, size and scope, and like the album itself, it’s massive. Midday Veil have long found themselves comfortable creating colossal concerns, as recorded on the band’s earliest, self-released explorations. The band’s preceding full-length album – 2013’s The Current, named one of the year’s best avant-rock releases by The Wire – could be viewed as the band emerging from their kosmische chrysalis, unfurling previously unheard banners of both colour and control. This Wilderness is the sound of the band under the self-imposed hypnosis of that emergence, extending the voyage with even more discipline than ever before.

Yet it’s the mystery of This Wilderness that makes the album among the most creatively compelling of this or any year, and vocalist and founding member Emily Pothast gives voice to that mystery both literally and figuratively, stating, “Lyrically, the songs on This Wilderness are a cycle that explores the self-destructiveness implicit in the civilizing impulse. It comes from a place that is critical, but ultimately acknowledges its complacency in this beautiful, terrifying culture that we all participate in whether we want to or not.”

On the opening invocation of ‘Babel’, Pothast addresses her place within This Wilderness and by extension, the place of the listener as well: This wilderness amazes me / but covers me with shame / when I aspire to codify / the thing that has no name.

The instrumental heart of This Wilderness remains the out-sized synth wizardry of co-founder David Golightly, who seems to have ingested every possible mind-altering sound from Stockhausen to Cybotron to the ‘Love to Love You’ of Donna Summer. They’re all on display here, made especially ornate by the driving percussion of Garrett Moore, the deep, submerging bass of Jayson Kochan, and the often-explosive, reptilian guitar lines of multi-instrumentalist Timm Mason. Rounding out the lineup is an all-star cast of guest spots including Bernie Worrell (Parliament, Funkadelic), Eyvind Kang and Skerik.
It’s unclear what will happen next, nor does it seem to particularly matter. Midday Veil will be staying in This Wilderness – in an increasingly interconnected, dynamic, even dangerous cosmos – for quite awhile, and it’s our good fortune to join them.

Album and poster art by Midday Veil’s Emily Pothast
This Wilderness Tracklisting
(September 11th, 2015/Beyond Beyond is Beyond)
1. Babel
2. Cages
3. Empire Is No More
4. The Water
5. Circle
6. I Am The War
7. Universes
PRE-ORDER THIS WILDERNESS HERE
A crucial contrast exists between space-rock bliss (Emily Pothast’s voice is at its most silken, especially as she sings the chorus: “Does it feel like magic?/Does it feel like pain?/Does it scratch the surface?/The echo that remains.”) and what could be a cosmic-disco breakdown in an opulent planetarium, all giddily turbulent synth burbling and chikka-wakka guitar stabs. “Babel” is another manifestation of Midday Veil’s outsized ambitions, and more proof that they’re one of this region’s greatest rock bands. – THE STRANGER
PRAISE FOR 2013’S THE CURRENT
“Few contemporary groups can boast a figure with the shamanic charisma and lung capacity of a Grace Slick or Renate Knaup. Seattle’s Midday Veil are an exception. In Emily Pothast they have a frontwoman and songwriter with a flair for the dramatic and the intensity of a 24 carat diva, capable of subtle insinuation and gale-force incantation.” – WIRE
“Shimmering synths, syncopated drumming and hushed vocals that, at times, recall the late period Gong and Hawkwind, the mainline krautrock acts and early 80s synth groups.” – RECORD COLLECTOR
“Midday Veil opt for a well-rounded casual cruise like Jefferson Airplane chewing peyote in a desert. Lanquidly propelled by a meditative rhythm section with sultry female vocals on top and bedded down on shimmering analogue electronics that wash over you in waves. The Current is perfect for easy summer listening.” – TERRORIZER

“Very groovy and addictive and an absolute must for all music lovers with an open mind for this kind of psychedelic, space-rock music.” – ECHOES AND DUST
“This kind of musical evolution is stuff Pink Floyd could be proud of. This record has blown me away.” – METALMOUTH
“Few bands can experiment with such structure and sound, and get away with it. MiddayVeil does it, though. Along the way, they envelop the listener in a flow of energy, tone, and art that doesn’t quite sound like anything else out there.” – PROG ARCHIVES
http://www.middayveil.com/
https://www.facebook.com/middayveil?fref=ts
https://twitter.com/middayveil
https://instagram.com/middayveil/
https://soundcloud.com/midday-veil