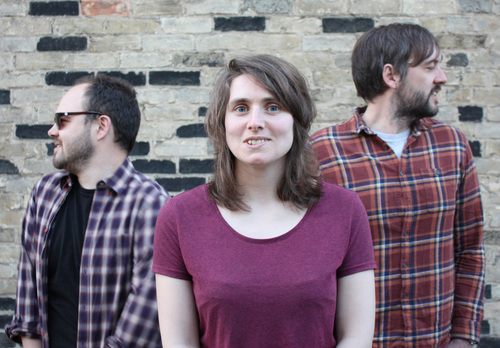 “Propped Up” is the first single to be taken from Mammoth Penguins‘ debut album Hide and Seek, released earlier this month on Fortuna POP! With a stirring chorus that makes you want to pump your fist and a call-and-response section that begs you to join in (“regrets, mistakes,…”), the rip-roaring “Propped Up” talks about how we’re all dependent on others to distract us from negative thoughts. Watch the video, directed by Darren Hayman, here.
When the much-loved Standard Fare called it a day after nine years and two albums, Emma Kupa upped sticks and moved from Sheffield to Cambridge, where she recruited Mark Boxall (bass) and Tom Barden (drums). Previously the bassist and lead singer in Standard Fare, Emma relished the switch to guitar in Mammoth Penguins, allowing her the space to deliver her trademark soaring vocals and to indulge in the occasional mean guitar solo. With Tom’s driving energy and Mark’s bouncy pop bass they quickly developed their riff-tastic powerpop sound.

Hide and Seek is an exhilarating collection of indie anthems, with Emma’s candid songwriting and heartfelt vocals at the fore. Chugging away like a great lost Weezer record, the songs are bold, loud and outrageously catchy, with lyrics that hit just the right chord, exploring the burgeoning responsibilities of being in your late 20s/early 30s.