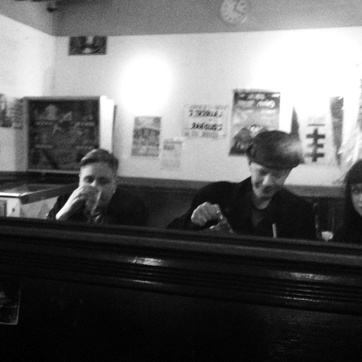 LIBEREZ ALL TENSE NOW LAX OUT NOW VIA NIGHT SCHOOL RECORDS;
LISTEN TO A THREE TRACK ALBUM SAMPLER
Liberez‘s latest musical endeavour All Tense Now Lax has finally seen light of day and is a record reassuringly unlike any other. To celebrate this release, Night School Records have posted an album sampler of three stunning tracks for your listening pleasure. Including the arresting and jolting juggernaut that is “Grease the Axels”, “419 Chop Your $”‘s brooding collage of smudged percussion and eerie strings and the previously unheard title track “All Tense Now Lax”, this will undoubtedly leave you wanting more.

A tense, gut-wrenching listen wrought with carefully considered space, the range of techniques and the depth of atmosphere on All Tense Now Lax has the capability to enthral. Salient sonic ingredients swirl around chamber music drone, flowing in to chalky noise rock, and exposed to charged particles of feedback and thrumming currents. The shrouded origins of these sounds, worn down and coated in Hannon’s priceless patina, mean All Tense Now Lax never settles on a simple depiction of dread, foreboding or anxiety but layers textures upon rhythms to produce towering minarets of conflicting, affecting emotion. Wailing violins are torn across the sparse clarity of lyric from collaborator Nina Bosnic, looping beats are interjected with the primitive percussion of Pete Wilkins, and become crushed with distortion. Chapters of palpitating intensity slowly unwind from the group’s spool, underlining a more pronounced focus on rhythm and movement on Liberezʼ third album that is perhaps what sets it most apart from previous work.

John Hannonʼs breadth of technical mastery on All Tense Now Lax is never fully revealed in an ostentatious way. Rather, the album is allowed to breathe and evolve, with field recordings, industrial patterns and alienated instrumentation woven together seamlessly for a tumultuous experience which transports rather than grounds the participant. With piercing compositions, ominous lulls and periods of unnerving calmness, this album sampler will begin your journey into Liberez’s intriguing and emotional vortex.