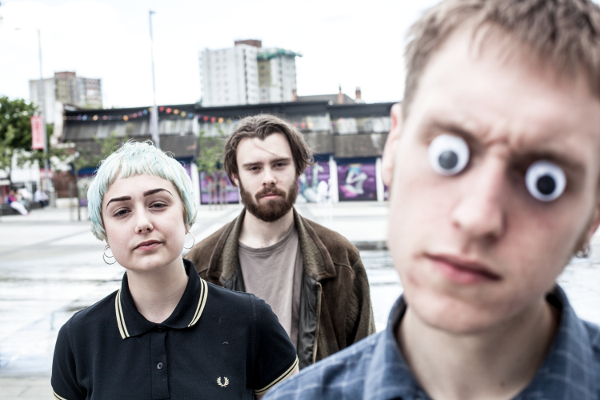 Listen to new single ‘Made of Concrete’

“Alt Rock with fuzzy hooks and a fresh approach” The Independent

“It is indeed a cause for celebration” The Guardian

”A perfect blend of melody and brutality” NME

As they prepare for the release of their debut album Urth, Nottingham’s Kagoulehave unveiled the new single ‘Made Of Concrete’. Listen now on SoundCloud. A more reflective track than previous singles ‘Glue’ and ‘Gush’, the ethereal ‘Made of Concrete’ sees bassist Lucy take lead vocals for a wistful and bittersweet performance.

Of the track, guitarist Cai says: “It came as a trapped sound in a Boss delay pedal box. Someone at the factory must’ve been humming in the right direction at the right time, the waves slipped through and the cardboard door sealed behind them. It journeyed over sea and land, benumbed by fear until I freed it from its torture and gave it a home (I think that’s how sound works right?) It was one of the first songs I wrote for Kagoule. I think I was 15. After the initial “Check out what this pedal can do” it hasn’t changed much, apart from the fact Lucy won the rights to sing it from me over a heated Beyblade tournament.”

Despite not yet being out of their teens, acclaim for the band has come from the likes of NME, Guardian and Rolling Stone, plus great support from BBC Radio 1, BBC 6Music and XFM. Having previously shared stages with the likes of Drenge, METZ, The Wytches and Iceage, Kagoule have just finished a series of dates with Johnny Marr and performed at Hyde Park alongside The Who.

Kagoule will celebrate the release of Urth with a series of instore performances at Rough Trade Nottingham and London’s Rough Trade East. Urth is released via Earache Records on August 21st 2015. It can now be pre-order via iTunes andEarache Records.