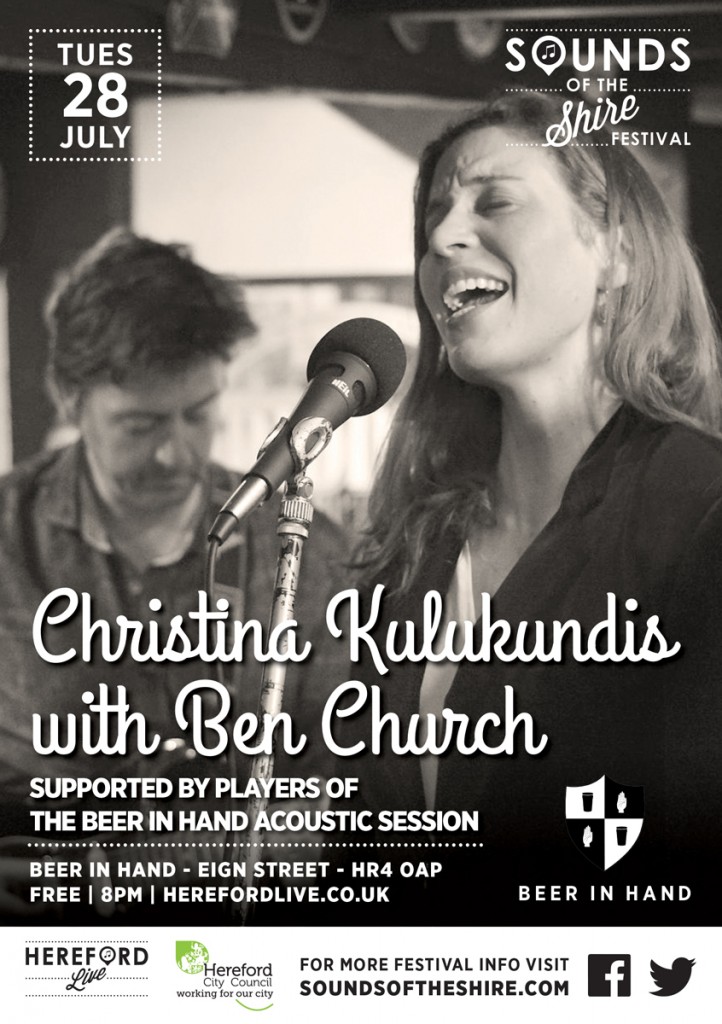 On Saturday, 25th July the first night of a series of events for this years Sounds Of The Shire Festival kicked off at The Venue. Over the course of 9 days Hereford City Centre will be thriving with local music and we will continue to post details about each event planned over the course of the forthcoming 9 day festival.

We are continuing to post details of all the events planned, visit our feature section to find out what Hereford Live have planned.

Continuing the live details, the fourth night will be hosted at The Beer in Hand for a special acoustic session.

An evening of folk presented by the Beer in Hand Acoustic Session, featuring Christina Kulukundis and Ben Church.

Christina Kulukundis is half English and half Greek, an odd combination you might think, for an alt-country singer-songwriter. Though born and raised in London, she spent summers at her grandparents place in Upstate New York, a mountainous region of the East Coast of America. Here the country sound started to seep in. After university at the Ivy League Brown University in Providence, Rhode Island in the USA, and 6 years living in NYC, she came back to the UK to write and record her first record. She made a critical impact with that 2006 debut release. It got Radio 2 and Radio 4 plays and achieved a coveted 4 stars from Mojo Magazine. The album was also BBC Radio Scotland’s Record of the Week, followed by a live spot on BBC Radio’s Loose Ends. Inspired by her surroundings, her new record Stars Behind Stars Behind Stars which was released Feb 9, 2015, constitutes a long-overdue follow-up to her acclaimed debut. She has also been refining a live set featuring Ben Church (guitar, banjo, harmonica) and Pete Bryden (bass guitar, piano). The alt-country lilt is still there, and the warm, clear vocals, but mixed with a few daggers in the writing that make Christina’s sound all the more penetrating and irresistible.

Ben Church plays guitar, dobro and harmonica. He lives with his wife and small army of sons down a forgotten lane in Great Malvern. Ben’s other projects include the bands Deep Elem and Wooden Horse. He has been playing guitar to an astounding level since his early teens.

Keep an eye on the site for more event info covering the hectic 9 days.
Be sure to tweet us any images you’ve taken during Sounds of the Shire @circuitsweet