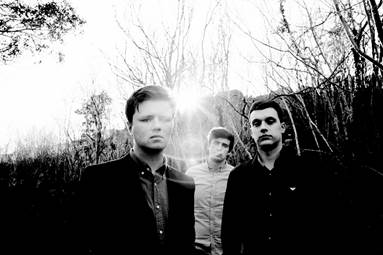 Out on July 10th via Straight Lines Are Fine

“’City Of Culture’ turns the title on its head, a bass-heavy monster which recalls Future of the Left, Wire or even Dublin contemporaries Girl Band.” – Clash

Brooding post-punk trio, Slow Riot, are releasing their debut single, ‘City Of Culture’, via Straight Lines Are Fine on July 10th. A three minute blast of angular, chiming guitars and half spoken / half shouted vocals, the song is a sardonic paean to the cultural status their native Limerick was awarded in 2014.

‘City Of Culture’ works as a perfect introduction to the band, infusing their indebted post-punk influences – Gang of Four, Television, Wire – with more contemporary bands such as Girl Band and Future of the Left. Dark, swooning guitars are layered over deep, rumbling bass tones reminiscent of the early garage-rock of The Horrors, whilst the unorthodox songwriting keeps the single deeply rooted in Slow Riot’s totally refreshing sound.

‘City Of Culture’, and the forthcoming ‘Cathedral’ EP from which it is taken, were both recorded at the Manic Street Preachers’ FASTER studio in Cardiff under the watchful eye of producer Kevin Vanbergen, whose back catalogue includes the likes of The Pixies, The Maccabees, Dinosaur Pile-Up, The La’s and Biffy Clyro. FASTER’s in-house engineer Loz Williams and the Manics’ James Dean Bradfield further extended a helping hand to the band, offering the use of their equipment and instruments, many of which were used in the making of past chart-topping records.

“Stab City” as Limerick has been affectionately referred to isn’t known for its musical heritage, The Cranberries being the city’s biggest musical export to date. But early Slow Riot demos released online in 2014 started turning heads, not to mention sparked the interest of legendary punk photographer Steve Gullick, who not only shot their recent band photos but lent his hand for the singles official video too.

The ‘Cathedral’ EP is due later in the year and will include re-recordings of those popular demos, ‘Demons’ and ‘Cooper’s Dream’, where Slow Riot channel more of those beautifully dynamic, spacious soundscapes, heavy walls of feedback and classic, pop sensibilities.

Now with a slew of local live appearances under their belt, including recent support to The Twilight Sad, the band are ready to show the rest of the world that they possess a sound and energy that far surpasses that of their hometown’s sleepy reputation.