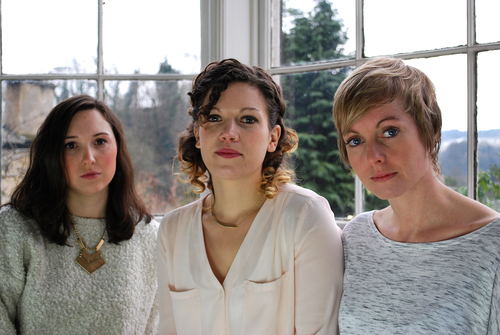 Taken from forthcoming album Etch and Etch Deep
Due out on How Does It Feel To Be Loved? on 31 July

Haiku Salut share the track “Hearts Not Parts”, the second single from their new album Etch And Etch Deep. Combining uplifting folk pop, evocative minimalism, and what sounds like drum’n’bass being played on an army of glockenspiels, the track is the first Haiku Salut song to feature vocals.

Speaking to Clash Magazine in 2013 about their instrumental musical palette, the band’s Sophie Barkerwood said: “When we started writing music together, we never actively said there would be no vocals. We wrote the music and it worked that way. The songs were complete the way they were. It’s funny, because some people think we’ve forgotten to sing! We’re not limiting ourselves to instrumental music though – there’s room for expansion if an idea takes us that way.”

Two years later, two songs on Etch And Etch Deep feature vocals: “Things Were Happening And They Were Strange” sees Gemma Barkerwood score a mini horror movie with her haunted, unsettling harmonies, while “Hearts Not Parts” finds Gemma and Louise Croft bringing an otherworldly ambience to the song’s ambitious twists and turns. “We wanted to make a song that was both poppy and creepy and we used our voices to do that,” explains Sophie. “It isn’t an act of compliance or defiance, it just seemed like the next natural step this song had to take.”

The first press reviews for Etch And Etch Deep have been extremely positive. Uncut called it “both warmly familiar and completely, fearlessly new” and Popmatters declared it a “vividly coloured sonic canvas”, while The Line Of Best Fit described the opening track and recent single, “Bleak And Beautiful (All Things)”, as “uniquely stunning, instrumental post-folk that isn’t afraid to tear up the rulebook and begin fresh.”