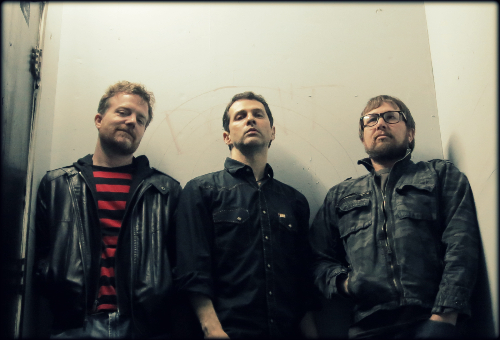 Listen to new song ‘Underneath All That Ever Was’ HERE

Made up of front man/guitarist Paul Bearer, bassist Jason Andy Argonauts and drummer Chris Bassett, Funeral Horse return to the fold this September with a brand new album Divinity For The Wicked on the Houston-based label Artificial Head Records.

Like a vision of ’80s post-hardcore punk rock, red-eyed and burning one in the back of Heavy Metal History 101, under the influence of The Melvins, Kyuss and Harvey Milk, Funeral Horse make music to gouge minds to. From album opener ‘There Shall Be Vultures,’ a track that straight off the bat (teeth flying) showcases one of the many strutting rock assaults the trio have become expert in peddling,Divinity For The Wicked throws open its doors to a wider world of distortions and digressions. Leading the charge with ‘Underneath All That Ever Was’, a lumbering paean drawn in part from words found in a suicide note of one of Bearer’s co-workers which had gone unnoticed for several days pinned to an office bulletin board, this is Funeral Horse at their darkest and most pensive. The Tuareg desert blues of ‘A Bit Of Weed’, the funereal bagpipes that send off ‘Gifts Of Opium And Myrrh’ and slow cinematic burn of instrumental ‘Cities Of The Red Night’ suggest there’s more than meets the immediate ear this time around for a band already masterful in the delivery of unfiltered noise and heavy fuzz rock.

Following on from last year’s imposing Sinister Rites Of The Master, and the thunderous lo-fi highs of their 2013 debut Savage Audio Demon, amid a mass brawl of riffs, megaphonic vocals, blues and backwater proto-metal, Divinity For The Wicked stands as a humble monument to the marginalised and maligned. An album just waiting to be picked up and played by those that have chosen to drop out and dedicate their entire existence to the pursuit of volume.

Divinity For The Wicked by Funeral Horse will be released on 15th September through Artificial Head Records. Stream and share new song ‘Underneath All That Ever Was’ here –