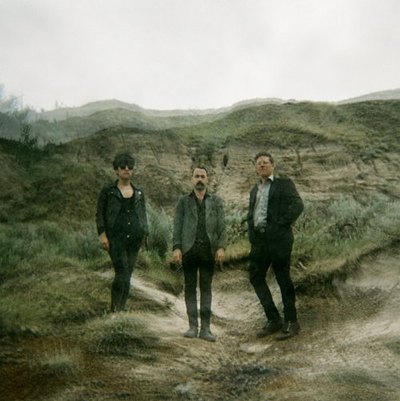 BIG | BRAVE ANNOUNCE DETAILS OF THEIR SECOND ALBUM AU DE LA;
UPCOMING ON SOUTHERN LORD 18 SEPTEMBER
Montreal’s BIG | BRAVE have their second full length, Au De La, recorded and ready to release via Southern Lord 18th September.
Building spectacular, inverted rock constructions that sound many magnitudes bigger than one would suspect a trio were capable of, BIG | BRAVE have been in existence since 2012, with members spread across two guitars and drums respectively.
Unhurried and untouchable, BIG | BRAVE possess that same valued independent spirit which pervades their local contemporaries, and is at the root of their earnest and exploratory musical offerings. Au De La lulls and lurches between passages of rhythmic noise pollution and vocal led awe, using considered juxtapositions of force and restraint to warp the senses across the forty-five minute playing time. Remarkably quiet at times, their ambience is not one of minimalism, but of dawning, foreboding power with the need to be vented, and when the hot flushes of blighted percussion and monochromatic guitar scrapes arrive, they arrive with triumphant force.
Special guest Jessica Moss (Thee Silver Mt Zion Memorial Orchestra) lends her hand on a few of the album’s five tracks, casting shimmering nets of violin across the band’s turbulent passages.

On signing with Southern Lord, the band had the following to say – “As artists, it is extremely validating that Southern Lord Recordings is so keen to be working with us. Since the inception of our band, we have been working relentlessly on our craft and to now be recognized by our peers, we could not be happier. Being so incredibly pleased to be working Southern Lord for this new record, it also gives us so much hope for what is to come next. With a label that has put out so many innovative and genre-defying records and a pronounced supporter of experimental heavy music, as a band and sound creators, our sonic exploration and experimentation can only continue to flourish. All possible pressures of limitations abolished, we feel honoured, inspired and the future is bright”
Recorded with Efrim Menuck (Godspeed You! Black Emperor/Thee Silver Mt Zion Memorial Orchestra) at Hotel2Tango, Au De La adds to a growing discography comprising their debut EP An Understanding Between People (2013) and the debut LP Feral Verdure, which they recorded at Paradise Studios with Jon Boles, and self-released in September 2014. Their live performances are plentiful, criss-crossing North America on multiple tours and at festivals, let’s hope they come to Europe soon. Check out the artwork and track list below:

TRACK LIST:
1. On The By And By And Thereon
2. Look At How The World Has Made A Change
3. do.no.harm.do.no.wrong.Do.No.Harm.Do.No.Wrong.DO.NO.HARM.DO.NO.WRONG.
4. And As The Waters Go
5. (re)Collection Part II
“It is impossible to avoid noticing the intensity with which Big Brave play every song of theirs. Anticipation gracefully helps to build up every salvo launched by the trio, assaulting the eardrum with incredible precision. The groups’ compositions are increasingly more refined, pushing the limits of what heavy experimental rock can sound like while maintaining a strong interest in reaching bliss.” – SUONI PER IL POPOLO