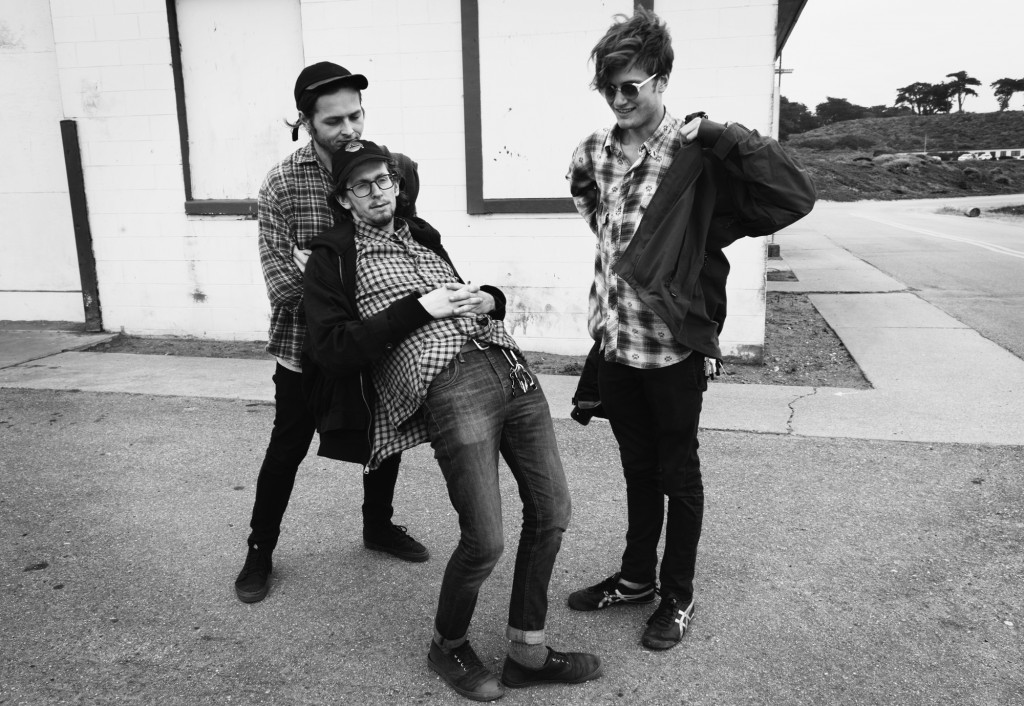 Boston’s Vundabar are sharing their new single “Darla” via VICE, a bouncy new track from the band’s upcoming sophomore album, Gawk. Following the premieres of “Chop” and “Oulala” on Stereogum and SPIN, the young trio are excited to share “Darla,” an energetic blast of the band’s unique surf pop influenced post-punk. Due out July 24th via the band’s own Gawk Records, Gawk is a dynamic record full of brilliant shifts, enormous hooks, tangled riffs and shimmering pop melodies. “Darla” compacts all of Vundabar’s idiosyncratic genre splicing together into a song built around themes of isolation. Vocalist/guitarist Brandon Hagen described the song’s titular character as a “loner seeking some group to identify with. Her lonerism is absolute in the way that she is an outsider even among an outsider group.” Expanding on the song, Hagen said, “Darla” touches on the contradiction of self-identification. A group of loners are no longer loners in their banding together, and choosing certain ideals to unify their group they lose their individuality.”
Premiering the song, VICE said, “The new record was either tracked in a decent studio or the boys have figured out some genius hack to make GarageBand sound incredible. It’s a thoughtful, post-punk thing with angular guitars and bleeding with hooks.”In the bleak sonic landscape that has become associated with the Boston underground, Vundabar are an anomaly. Rather than wallow in minor chord fury and noise soaked post-punk, the young Boston trio have opted for something brighter and catchier, using their penchant for complex melodies and soaring harmonies to create an all shimmering beast of bizarre pop splendor. Gawk is oozing with shifting noise pop structures, touches of twisted surf rock, math pop, and indie-centric dance punk, Vundabar’s sound is expansive, shuffling with their feet on the ground while their heads float above the clouds. Brandon Hagen’s dynamic croon bounces between a casual vibrato and soulful falsetto as the band’s interlocked melodies create the perfect accompaniment. It’s pop bliss for the summer sun, a glowing soundtrack to the year’s most celebrated months.
STREAM VUNDABAR’S “DARLA” VIA VICE:
http://www.vice.com/read/vundabar-are-best-friends-who-make-good-post-punk-915
Vundabar, the seriously infectious Boston jangle pop trio have built a strong reputation throughout Boston as one of the city’s best up-and-coming bands, constantly touring and playing shows, and while they are fairly young (members are all between 20 and 21), their sound is reminiscent of a veteran band. Gawk is the type of album that bubbles with soulful sun-drenched bliss, off kilter indie rock melodies, gorgeous harmonies and an endless supply of enormous hooks. East coast indie rock with a West coast soul… one listen and you’re hooked. The band are currently on a US tour, check out all the dates below.

Stereogum recently premiered “Chop,” noting the band’s unique take on the Boston underground’s sound and their ability for crafting pure pop out of complexity and intricate song structures:

“Enter Vundabar, an excellent example of the way in which all of the melodic intricacies picked up and defined as the “Boston sound” can easily be repurposed and reordered into pop songs with broader appeal. “Chop” has all of the same yanking arrangements and spitfire drum beats as some of Vundabar’s peers, but their vocal performance and lyrical prose sound untethered to the favored aesthetic of their immediate surroundings”

SPIN shared the album’s second single, “Oulala,” saying, “treads in pop territory, but it also traffics in the band’s signature brand of dynamic shifts. Though it kicks off with clattering drums and punchy guitar, the track’s four-and-a-half minutes are also packed with sing-song hooks, knotty instrumental lines, and a hazy coda that recalls a revved-up Real Estate track”.

Vundabar was born out of the alienation that goes along with the high school years. Brandon Hagen (20) was a lanky weirdo, ill equipped for Scituate High School’s long standing history of sports, trucks, and drinking. His recreational activities included dodging rocks thrown by groups of future frat bro’s and in turn further egging them on by relaying spray painted messages in their driveways. Drew McDonald (20) was an equally lanky glasses-wearing loner, having moved three times throughout his youth to finally end up living next door to Brandon. This chance occurrence made Hagen and McDonald into an unlikely pair.

After a self release, incessant touring, and having Zackery Abramo (21) join to play bass, they received an offer from a French booking agency to tour throughout Europe. In the summer and fall of 2014 they toured Europe for three months, with a month long US tour wedged in the middle. Despite the excitement that came along with these opportunities, each member’s home life was becoming more and more unstable throughout these tours. Between divorces, foreclosures, financial troubles and debilitating mental health problems, the band had become a source of stability in a seemingly all at once unstable world. After these tours ended the three went into Mystic Valley Analog Recording Studio to record a follow up to ‘Antics‘.