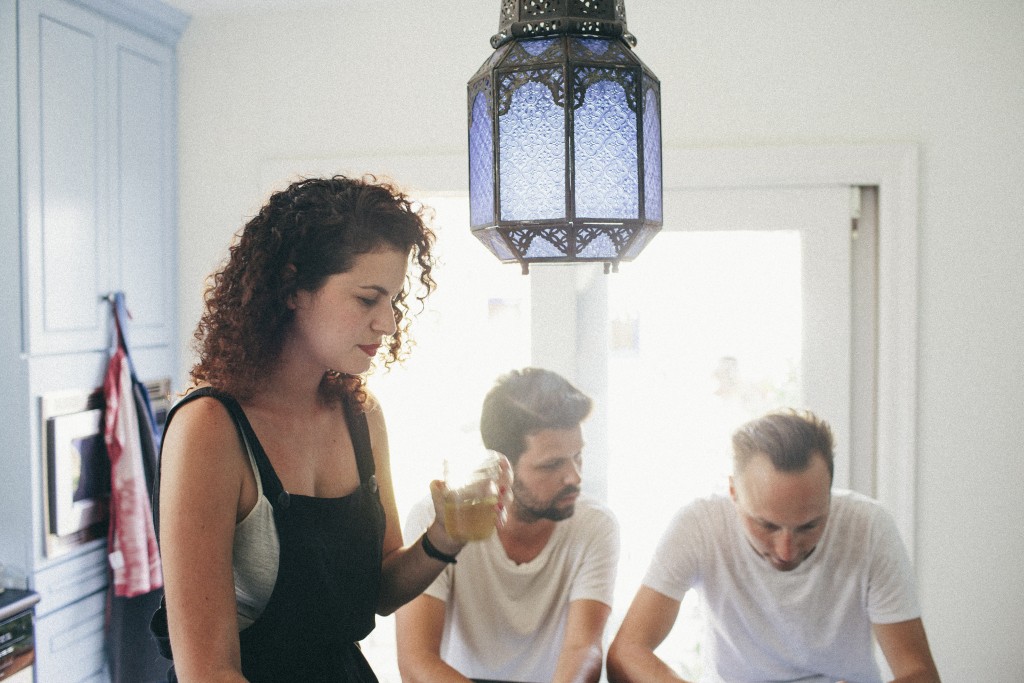 AND ANNOUNCE NEW ALBUM ‘DO YOU FEEL OK?’

LA indie electro-pop trio, Superhumanoids have debuted “Anxious In Venice,” the first cut from their upcoming sophomore album, ‘Do You Feel Ok?’ due out September 11, 2015 via Innovative Leisure. NPR Music proclaims “Los Angeles trio Superhumanoids have only been together since 2010, but their latest single, ‘Anxious In Venice,’ sounds like they’ve matured 20 years since their last release, 2013’s Exhibitionists. Playful, ’80s-referencing synth lines have given way to darker, seething electronics.”

NPR adds, “’Anxious In Venice’ pairs its titular subject matter seamlessly. The gloss and glamour of Sarah Chernoff’s vocals can’t quite quell the skittish, propulsive drum machine and creeping synth behind her. Her whispers and yells, deployed sparingly and impeccably, give an edge to her otherwise sweet soprano. This is the soundtrack to staying out a little too late, or getting a little too lost in an unfamiliar city. ‘Anxious in Venice’ exhibits an ease with technology that is distinctly, perfectly millennial.”

‘Do You Feel Ok?’ It’s a question you can answer with a shake of the head or an hour-long tangent. For Superhumanoids, it’s the title of their sophomore album, but it goes deeper than that.

It’s an inquiry that they kept asking each other throughout recording—a meditation on indecision, the infinite paths available, the dubious and righteous choices you’ve made, the changes in your own life that don’t always parallel those closest to you. It can be an obvious “yes” or “no,” or an existential inquiry without easy answers.

Since their 2013 Innovative Leisure debut, ‘Exhibitions,’ Superhumanoids sound like they’ve traveled 30 years forward. Whereas their first album elicited comparisons to artists from the 1980’s, ‘Do You Feel Ok?’ reflects the present in all the power and clarity possible with modern technology.

The synths are phosphorescent. Lead singer Sarah Chernoff’s vocals are sleek, ethereal, and ignore gravitational limitations. With propulsive drum machines and feathery hooks, the band blends futuristic electronic textures with classic regard for songwriting. Superhumanoids are singular, but their grace at switching between dance music and rock recall similar hybrids, Darkside and Caribou.

“In the middle of recording, we went on tour with Erasure and realized that the songs we’d written weren’t achieving the energetic atmosphere we hoped for,” says Max St. John, the band’s synth programmer. When we got home we made the necessary changes to create that energy. We wrote additional songs, we sped up tempos, and made changes to the production that we felt were more exciting.”

All three members, Chernoff, Cameron Parkins, and St. John share writing credits and display a rare chemistry. But the durability of their bond comes from both an inherent connection and having been repeatedly tested.

“When we released our first record we had a lot of expectations, some of which weren’t met. The ensuing disappointment caused strain on our relationships as band mates and friends,” says Parkins, Superhumanoids’ guitarist. “When we got together again to start making music for the second album, our friendships felt re invigorated and our eyes were open as to what to ‘expect’ from releasing an album.”

Their debut found Pitchfork hailing them for their “sleepily epic dream-pop.” The Fader praised their “luxurious radio-friendly songs.” The New York Times’ T Magazine called “So Strange” a candidate for song of the summer. But with their second album, they’ve ascended to a different elevation—retaining their pop infectiousness but adding an experimental edge.

‘Do You Feel Ok?’ is the leap that comes when a band figures out who they are, how to trust each other, and how to create a sound of their own. It’s fluid, full of movement, and capable of pushing people emotionally. If you’re exhausted from the monotony of Internet consensus and homogenous bands, press play. This can soundtrack summer pool parties or the drive home—when you feel okay and when you don’t.