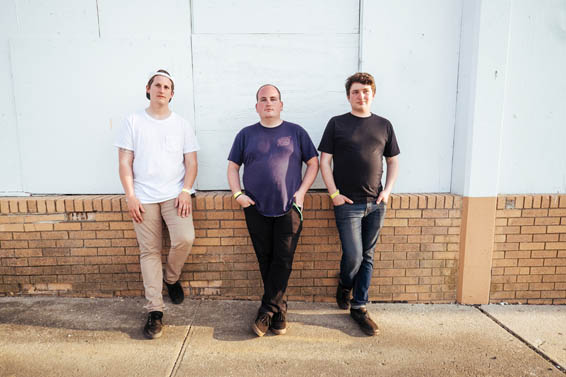 West Chester, Pennsylvania punk trio Spraynard literally took Noisey to “Applebee’s Bar” this weekend to discuss the newest single off their upcoming full-length Mable, their first LP for storied independent label Jade Tree.  In a conversation that ranged from gentrification to long-term friendships to beloved pets, the band went in depth on their new record alongside the premiere of the new track. “Spraynard is  America’s thing, inspiring kids in small towns around the country, off the map places like Cohoes, New York or Flemington, New Jersey to work on starting or improving their own scenes, and throwing out the idea that it’s okay to be content with staying in your community, no matter how large or small,” Noisey nicely summed up.

Mable is available for pre-order from Jade Tree now, along with the band’s recently released Bench 7″ on the label. Spraynard also announced a short run of July album release shows and an August tour this week with Dan Andriano in the Emergency Room, Jeff Rosenstock and Pet Symmetry (all tour dates below).

Listen to “Applebee’s Bar”
Spraynard began playing together in 2009, focusing on cultivating a scene organically around them and quickly becoming local favorites in the process. The band released their first full length Cut and Paste in 2010, and caught the attention of Asian Man Records, who released the band’s second full-length, Funtitled, in 2011. With their steadily growing popularity, the band began touring more extensively and spending more time in the nearby city of Philadelphia, while continuing to work hard to keep the West Chester scene alive. The endless touring and sudden popularity turned out to be more straining then expected, leading the band to announce a hiatus in 2012.

But the break did not last long and buoyed by the strong friendships between the members, the band announced the release of The Mark, Tom, and Patrick Show, a compilation record on Asian Man in 2014. The release was quickly followed by a sold out show in Philadelphia, and it was quickly evident that Spraynard’s fan base had only grown in their time apart. The remainder of 2014 saw the band embark on a full US headlining tour before venturing to the UK with Modern Baseball.  2015 has started off strong for the band with several shorter tour stints and appearances at Skate & Surf Festival and Bled Fest in May as well as the release of their new Jade Tree 7″ Bench.  The year looks to have much more in store for the band including the aforementioned summer tour with Dan Andriano in the Emergency Room and Jeff Rosenstock and the July release of Mable.

& = w/ The World Is A Beautiful Place And I Am No Longer Afraid To Die, Soda Bomb
^ = w/ Dogs On Acid
* = w/ Dan Andriano in the Emergency Room, Jeff Rosenstock, Pet Symmetry