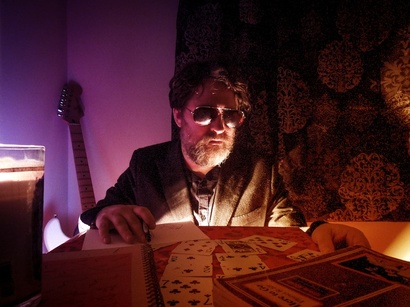 SIX ORGANS OF ADMITTANCE TOURING UK & ANNOUNCES WORKSHOP AT IMMINENT CAFE OTO WEEKEND RESIDENCY; LISTEN TO HEXADIC RESPONSES
Six Organs of Admittance are currently on the road in the UK, sharing exceptional noise-stippled guitar with audiences, culminating intwo days and three sessions of performance and participation (including a newly announced Hexadic workshop) in the capital over the imminent weekend of the 20th-21st.
Setting up shop in Dalston’s famed Cafe OTO on the evening of Saturday 20th, Six Organs Of Admittance will first be performing as a full live band (joining Ben Chasny are Adam Payne & Andrew Mitchel), while on the evening of Sunday 21st Chasny will host a second live performance in the evening, this time unaccompanied. On the afternoon of the Sunday, Ben Chasny will demonstrate the basic principles and methods of the Hexadic System, a system developed by Ben over the last few years to create structures that facilitate composition with the guitar. Participants will learn techniques such as “linear method of heaviness/lightness” and how to use the Hexadic Figure. There will also be a demonstration of the game elements of the system and how one can use it to compose.
All the components of the Hexadic system will be for sale at the shows, and it’s a fantastic chance to get your hands on the gorgeous card deck and book that Drag City produced to accommodate Hexadic composition at home (or anywhere, for that matter!).
Relinquishing instrumental instinct and control to a pack of cards and their corresponding combinatorial outcomes, the Hexadic system forms the basis of the most recent Six Organs of Admittance album of the same name, and Chasny has subsequently been spreading the workings of his intriguing methodology in towns and cities far and wide since its release. Read the remaining dates below:
SIX ORGANS OF ADMITTANCE TOUR DATES
Wednesday 17 June – Glasgow, Broadcast
Thursday 18 June – Newcastle, Cluny
Saturday 20th – Full band performance
Sunday 21st (afternoon 3pm) – Hexadic workshop
Sunday 21st (evening) – Solo performance
(All tickets can be bought at the Cafe OTO site, available at different combinations of prices for members and those wanting to attend multiple performances)
Monday 22 June – Amsterdam, Paradiso
Also, make sure to check out the section of the Six Organs site dedicated to responses to the Hexadic system, where followers and participants of the Hexadic have sent in their work – all of it mesmerising and intellectually fulfilling! Click here to hear and read about the submissions, and consider recording some for yourself… www.sixorgans.com/hexadic-sonic-explorations
www.dragcity.com
twitter.com/6organs
www.sixorgans.com