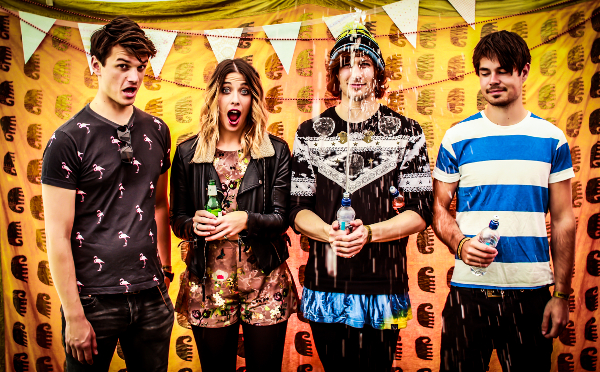 “Scottish groove rockers Vukovi are equally as comfortable setting alight dancefloors as firing up a moshpit, as the muscular, body-shifting rock of So Long Gone would bear witness to.” Q MAGAZINE

“Vukovi might – just might – be next in line. The bands powerful live show has built them a passionate cult audience.” CLASH

“Punkish and potent, this is a no-nonsense band who tear through their tracks with vigour…. this is quality.” THE SKINNY

Experimental Scottish rock outfit Vukovi have announced the release of their massive new track ‘Boy George’, taken from their forthcoming debut album. A live favourite from Vukovi’s growing arsenal of tracks, ‘Boy George’ is both dancefloor and mosh-pit ready, with its huge guitar hook and soaring chorus.

Of the track, singer Janine says: “”I wanted the listener to have their own perception on the lyrics. Narcissism is a key word. People “climbing up the ladder” the wrong way in this industry. It sets a terrible example. “

Despite a rich history of Scottish rock bands, Vukovi are forming their own path with their intricate guitar nuances, muscular riffs, attention to melody and refreshingly energetic live shows. The band have shared stages with the likes Don Broco, Lower Than Atlantis and fellow Scots Prides and Twin Atlantic and played festivals including T in the Park, Hard Rock Calling and Hit The Deck.

Vukovi are currently preparing their debut album and will be heading out on tour over the summer and autumn. ‘Boy George’ is released on 3rd August 2015 and available to pre-order now via iTunes.

CRISTOBAL AND THE SEA – SHARE NEW SINGLE ‘SUNSET OF OUR TROUBLES’