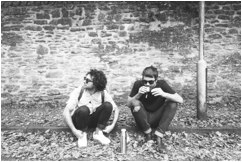 “Swedish duo Sameblod’s “Flourish” is a magnificent slice of dance-pop, a flurry of ravey synths and nostalgic vocals”(The Fader)

“On their latest, the Sweden-by-San-Francisco duo whip up a twinkling, tropical dance jam that sounds like Thomas Mars singing over dreamy, old school Cut Copy.” (All Things Go)

Hot on the heels of their critically acclaimed single ‘Flourish’ which featured on FUSE TV’s ‘10 Best Dance Songs We Heard in February’, the Swedish synth-pop sensations Sameblod are about to release their eagerly awaited electronic pop single ‘My Fortune’.  Frederick Rundqvist and Mikael Mattisson met in Stockholm by way of San Francisco (yep, really), and started making music together which they describe as “hopeful-electronic-mellow-pop with a lot of different influences”.  There is a beautiful, nostalgic undertone to their tracks, resonant of the classic dance hits of summers gone by.  The vocals are heavy with folkie emo angst, almost a hint of Bright Eyes’ Conor Oberst.  Somehow Sameblod have managed to create a sophisticated sound that is quite simply unique to them, but if we had to compare it to anything, it would be a drop of MGMT, a hint of Passion Pit and a tad of Miike Snow.

‘My Fortune’ will be available for sale and download via Sommarhjärta Label everywhere on the 15th June 2015.