Philadelphia Collins, the recording project of Devin McKnight (Speedy Ortiz/Grass Is Green) and Theo Hartlett (Ovlov/Flat Swamp) will release Derp Swervin’, their debut EP on July 24th via Exploding In Sound Records. The band are excited to share the album’s lead single, “Sofa Queen” on The FADER, featuring vocals from Palehound’s Ellen Kempner. The FADER praised the collaboration between the band and Kempner, offering, “Her striking, sort of fuzzy vocals coast atop the duo’s noisy instrumental, which snowballs from some stoned chord changes into a loud, mindfuck breakdown”.

Considered by some to be an EIS all-star team of sorts, the duo of McKnight (guitar) and Hartlett (bass, drums) began writing songs together in the summer of 2013, laying down the initial framework of the what would become Derp Swervin’. With the music written and demoed the band decided to ask some friends to write and record vocals, reaching out to Kempner, Two Inch Astronaut’s Sam Rosenberg, Dirty Dishes’ Jenny Tuite, andSpook The Herd’s Abe Kimball (as well as Philly Collins’ own Theo Hartlett). The results were something even the band wasn’t prepared for. Speaking about the band and the relaxed origins of their debut EP, McKnight shared…

“Theo and I kinda just started jamming to mess around with recording on our own. We ended up writing a lot of the songs together instrumentally in one sitting and demoing it as soon as possible. Eventually it seemed like this could actually be a thing so we thought it’d make the songs more interesting to get others to contribute vocally. For “Sofa Queen,” I asked Ellen to try some stuff out because I’d always been really impressed by everything she’d done with Palehound. I think time had passed and I actually forgot I’d asked her and then I checked my email and this amazing song was there that she’d recorded vocals on. Needless to say i was blown away. After that I think, we were confident in our own ability to record clear demos but Jesse Weiss (Grass Is Green/Palehound/Spook The Herd) had been killin it on the recording game and I thought I’d love to have him help track and mix the final versions. Some how the pieces came together and Philly Collins became a thing.” 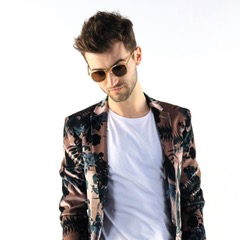