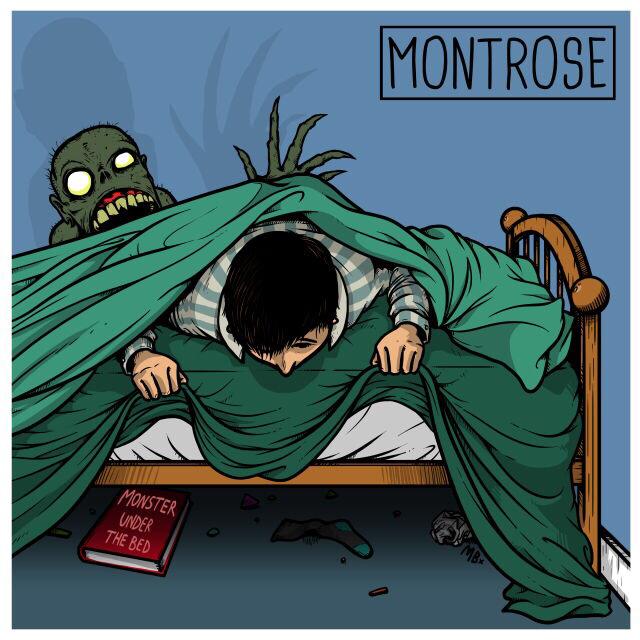 “We want to make sure we don’t get lost in the crowd,” says Jason Bishop, vocalist of Bath based quartet Montrose, of the musical gearshift taken on new E.P, Monster Under The Bed; “Our sound on the new release has definitely evolved; we’ve beefed it up and made it a bit more gritty. We don’t want to just be another pop punk band; as much as we all love the genre and it’s current resurgence, we wanted to make ourselves stand out.” Though Monster Under The Bed is still bristling with the kind of infectious vocal hooks most commonly brewed in the pop punk gene cauldron, it’s also laden with bursts of staccato, punchy guitar that wouldn’t be lost amongst the early output of the likes of Four Year Strong, Funeral For A Friend or Thrice, where riffs and memorable melody collided with kinetic synergy. Ahead of it’s release on 15/06/15, vocalist Jason discusses their time in the studio….

“Before we hit the studio in March, we were already pretty prepared as we had done 99% of the pre-production work already. We had relentlessly practiced the songs to the point of almost being sick of them, and also recorded demos and click tracks to get everything as tight as possible and to utilise our time in the studio as efficiently as possible, so we were definitely well prepared! We decided to record with Kevin Peters at Anemic Studios in Bristol. The reason for this is we know a bunch of dudes who have recorded with him, and he’s obviously local to ourselves. We had listened to his previous work and we really liked that it had such a “big” sound, which is something we wanted to go for. He usually works with bands much heavier than ourselves, so we knew he’d be able to give us the sound we wanted. We started off the same way as most bands would and after a quick chat with Kev we got cracking on the drums, which Jake managed to nail in less than a day! We recorded a few takes of course, but as we’d already put in the work before hand it was fairly straight forward and done in mega quick time!

After that we started putting down the bass, and again this seemed to take no time at all due to the face we’d already put the hard work in! Ben came up with a few new ideas on the spot which seemed to work pretty well and we were stoked on the result! When Sam started on guitars, we were all pretty shocked to see that he basically nailed every song first time, which was cool. We played around with a few ideas but for the majority of the guitar parts, we just went with what we had on the demos. We split the vocals into two days, just so they sounded as fresh as possible, and apart from a little reverb, the vocals are pretty much just as they were. The track ‘Good Old Days’ which is my personal favourite from the ep, we actually only finished writing it the day before we hit the studio. The rest of the songs had been prepared and ready for months, but this one we put together last minute and was one of those songs that just happened on it’s own. I personally feel that those make the best ones sometimes! Overall, we’re stoked on how the EP sounds. It definitely has that ‘big’ sound that made us want to record with Kev in the first place, and we’d definitely record with him again in the future!”

Monster Under The Bed is released 15/06/15 – http://montroseofficial.bandcamp.com