Micko Westmoreland to release Yours Etc Abc on 14th August 2015 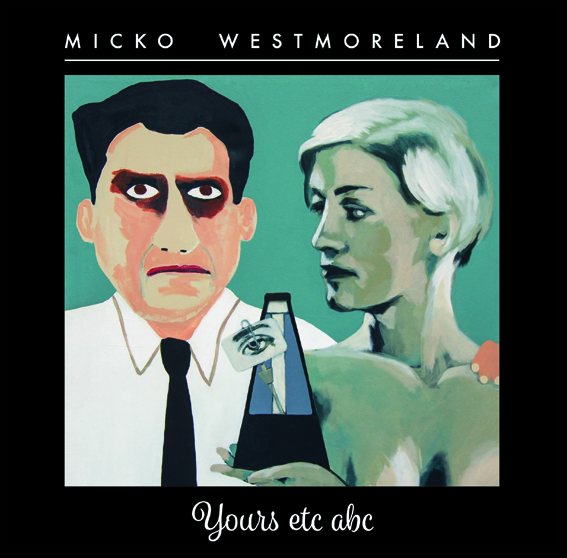 Micko Westmoreland to release Yours Etc Abc
on 14th August 2015

Micko Westmoreland follows up his 2009, Wax and Wayne (Sartorial records) with YoursEtc Abc, an album full of intricate songs that play on good old fashioned hooks, coupled with a well-honed sense of musical experimentation.  This is Micko’s fourth full-length release, and follows a previous liaison with Interscope – One Pound Note and Fabrications(Spiky records) under the moniker, ‘The Bowling Green’.

In between recent releases, Micko has been firming up his soundtrack credentials by working with brother Wash Westmoreland (director of Still Alice).  Film fans will also know Micko from his acting role as the reclusive glam rock star Jack Fairy starring alongside Ewan McGregor and Christian Bale in the Todd Haynes film Velvet Goldmine.

Yours Etc Abc features guests; Mark ‘Bedders’ Bedford (Madness), Mickey Gallagher(The Animals/The Blockheads) and Terry Edwards (PJ Harvey/Franz Ferdinand/Gallon Drunk) – a personnel of key British players from the 1960s and 70s right up to the present day. The sound is a contemporary incarnation of 1966 meets 1980; songs dealing with issues of desperation, sexualisation and alienation.

Opening track ‘Freaksville’ sets the tone wonderfully with a wistful guitar underpinning tales of being coerced into conformity, not by society or the jobcentre but by your own partner,“Is this a marriage made in heaven? It’s funny sometimes how I have to repeat the question”.  Present concerns about the age of austerity are raised in the charged vibe of ‘Schmescos’.

In ‘A place for everything’ we hear about obsessive compulsive disorder; “Wearing down friendships until the bitter end”, then the album bounces into the wonderful trio of ‘Yours Etc Abc’, ‘Casting Couch’ and ‘What do you bring to the party’.  On the title track, the characteristic chiming 12 string Rickenbacker guitar picks up just where others have left off.

As we reach ‘The Facts of life’ there are tales of girls reading dirty magazines on trains – well this is a journey through life.  Psychic TV cover ‘Godstar’ tells the story of feted Rolling Stone, Brian Jones – are we really all abandoned in the end?

Westmoreland says of the record, “Musically the album took flight with a 60’s guitar
ensemble, my quartet consisted of a Fender, Gretsch, Rickenbacker and an old Gibson acoustic . They complement each other superbly neither over shadowing the other, blending really well with my production sound.  Lyrically, I started to write about different personalities I’d come across down the line, situations that didn’t seem to add up. I used those observations, experiences and how I felt to meditate on the idea for the songs I wished to write”.

Micko Westmoreland is also presently the youngster in the Travelling Wilburys MK 2!  A side project called ‘The Spammed” with the legendary Neil Innes (Monty Python/The Rutles), Horace Panter (The Specials), Rat Scabies (The Damned) and Kevin Eldon(BBC2 series ‘It’s Kevin”), with all proceeds going to charity.

Yours Etc Abc to be released 14th August via Landline Records.

The album launch will take place on 10th September by means of a pop art show at the A Side B Side gallery in Hackney, London.  Micko will DJ/soundtrack to artworks and videos commissioned specially for the album.