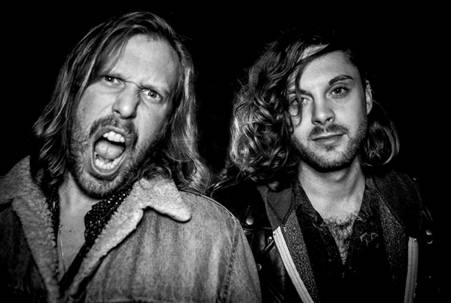 “A pair of tune-wielding upstarts who want nothing more than to bore into the chest of garage rock and pull out its heart.” Crack

“If grunge was a yoghurt left at the back of the fridge for six months, it’d be this pair. An unrelenting squall, somewhere in amongst the fuzz pedals lie itchy, contagious, brattish melodies.” Clash

After plundering the underground live scene round the UK for the past 18 months and supporting the likes of Slaves, Cerebral Ballzy and God Damn, Leeds / Guildford based duo Love Buzzard are about to launch their debut album, ‘Antifistamines’ through the cult London based record label 1234 Records (The Buzzcocks / Babyshambles).

The video for ‘Cash’ which has just been unveiled features wicked neon bright coloured sickly animations mashed over footage of the duo. As the track grinds, perplexes and hits hard with fuzzy thrash riffs and obscure chanting, the leather clad pair rampage through streets firing precious cash from super soakers, morphing passers by into gritty cartoon characters also.

The album due out in August 2015 is a mixture of genre defying psychgaragepunk. Raw, feral, addictive and more aggressive than everything that has stood before it.

Artwork and animation by Russell Taysom

Loscil shares a video for “Equivalent 6” taken from the new album incoming via Kranky, 16 August