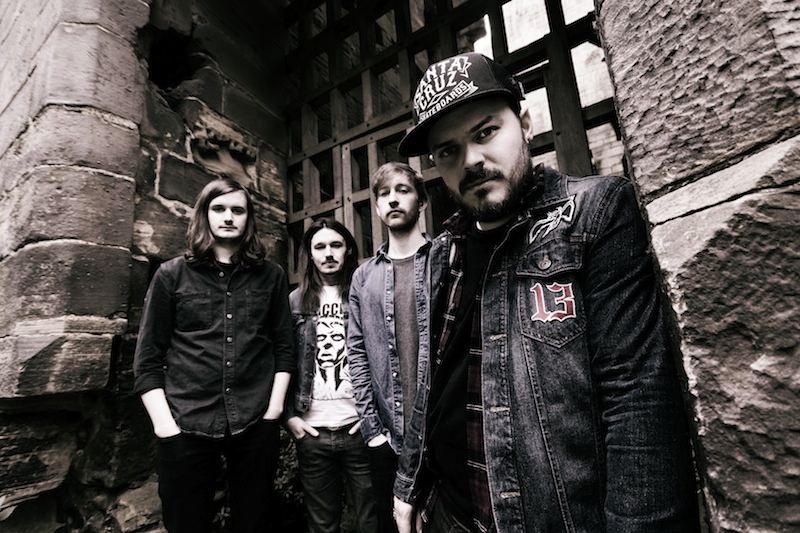 Terminal follows hot on the heels of Limb‘s self-titled 2014 debut, but takes an enormous leap forward. Perhaps it’s the result of playing across the UK on tour with New Heavy Sounds labelmates Black Moth, and the introduction of new drummer Tom Mowforth (ex-Uncle Acid) but Limb are now more explosive than ever before. Where the debut showcased their thick, loping, and stripped-down sound, Terminal cranks up the sonics, mashes the grooves, and ups the filth quotient to truly corrosive levels.

In their quest to take things to the next planet, Limb hooked up with legendary extreme metal producer Russ Russell (Napalm Death, Dimmu Borgir, Evile, etc.). A bold move, but together they’ve created a monolithic statement of intent. Terminal is a down-tuned and dirty barrage of monumental riffs.

Recognizing Limb’s love of both stoner dirge and glam stomp, Russell has described the band’s sound as “GoatSlade” — and we can see why. Buried in the dirt is a cosmic boogie, which pays more than a nod to the decade of stacked platform boots without ever feeling retro.

Right from the opening double whammy of “Three Snake Leaves” and “Ghost Dance”, you’re propelled into a maelstrom that never lets up. The riffs come layered, thick, and fast, from the fuzzy throb of “Dawn Raiders” to the off-kilter groove of “Spoils of a Portrait King”, marking the halfway point with its monstrous, doomy outro. The second half of the album contains Limb’s take on a traditional murder ballad, “Down by the Banks”, as well as the chaotic hardcore of “Mortuary Teeth”. The whole thing ends with “Cocytus”, the soundtrack to a voyage across the eponymous river of dead souls that encircles Hell, complete with a hypnotic riff ending.

Thematically the album addresses the prospect of absolute destruction and the possibility of life thereafter, which is echoed in the album’s artwork, a startling retro-futuristic collage by Cur3es (responsible for the art of Fu Manchu‘s Gigantoid). It conveys the album’s mood perfectly: the familiar juxtaposed with the unknown, a world where nothing is quite as it should be.

05. Spoils of a Portrait King