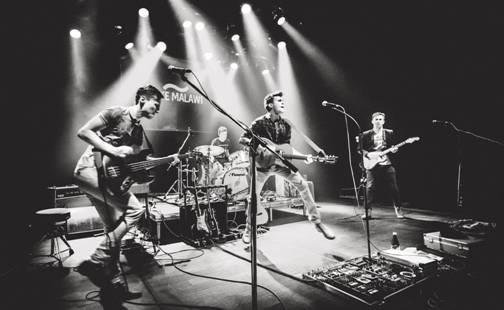 Taken from the ‘We Are Making Love Again’ EP

“This is superb!!! My total respect, these songs are beautiful.”- (The Rolling Stones’ producer Chris Kimsey)

“Working with Albert was always really inspiring. It motivated me to grow as a human being.” – (Yemi AD – Kanye West’s Show Art Director)

If this is the beginning of a brit pop renaissance, Lake Malawi’s new EP ‘We Are Making Love Again’ will be an anthem of this new era. The band have enjoyed a meteoric rise, supporting rock giants Thirty Seconds to Mars last year and completed this whirlwind year performing at the Great Escape festival and a chain of UK and European dates. The MTV award winning frontman, Albert Cerny, has decided to share with us a new set of tracks called ‘Young Blood’ and ‘Aubrey’.

From the opening discordant strumming of a soft but energetic acoustic guitar, in the minimalist style of Split Enz/ Crowded House, there is almost the impression that the songs were recorded by the Finn Brothers themselves, sprinkled with beautiful sounding harmonies which both Tim and Neil are so well known for.

The tracks are produced by the band with Filip Gemroth, and co-produced by Matt Lawrence and Mo Hausler.

So what’s the outcome of their joint effort then? Let me put it this way, think Cast, think Ocean Colour Scene– think Lake Malawi.

‘Young Blood’ and ‘Aubrey’ are taken out of their 5-track EP ‘We Are Making Love Again’, and both are available for sale and download NOW!