Jerusalem In My Heart announces second album of expansive Montreal via Beirut compositions, named ‘If He Dies, If If If If If If’‏ 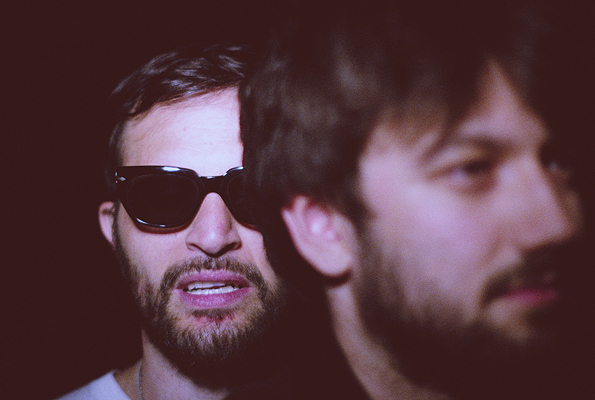 JERUSALEM IN MY HEART ANNOUNCES SECOND ALBUM OF EXPANSIVE MONTREAL VIA BEIRUT COMPOSITIONS, NAMED ‘IF HE DIES, IF IF IF IF IF IF’
RELEASE DATE: 4 SEPT

Radwan Ghazi Moumneh, alongside fellow Montreal artist Charles-André Coderre, returns with If He Dies, If If If If If If, a second full-length album from his acclaimed Jerusalem In My Heart (JIMH) project, conceived and recorded in his dual homes of Montréal and Beirut.

Known for his production and engineering work with artists as diverse as Matana Roberts (all three chapters of her Coin Coin recordings to date), Mashrou’ Leila, Ought, Eric Chenaux (with whom he also released a collaborative album for the Grapefruit Records Club) and Suuns (with whom he also released a collaborative album on Secretly Canadian in spring 2015), Moumneh has been firing on all cylinders over the past few years. He has brought JIMH to mesmerized live audiences in Canada, Europe and the Middle East since the release of his first album in 2013, following many years during which the project was a strictly Montréal-based live/theatrical happening. While JIMH continues to expand to include a larger cast of players for select engagements and commissions, the group is currently an immersive and performative audio-visual duo at its core, with Moumneh responsible for all sound/composition and Coderre creating 16mm visuals and live projections/installations.

WATCH THIS VIDEO FEATURING NEW MUSIC
Moumneh expands his compositional palette on If He Dies, If If If If If If, exploring new deconstructions and juxtapositions of both traditional and popular Arab musical currents, with an album that oscillates between powerfully emotive vocal tunes and instrumental works that primarily make use of Radwan’s expressive acoustic playing on buzuk as a point of departure. One of Moumneh’s finest melismatic a cappella vocal performances opens the album, followed by the uncharacteristically literal-titled “A Granular Buzuk”, where said instrument is processed, re-sampled and otherwise disrupted through Radwan’s real-time custom signal patches. “7ebr El 3oyoun” follows with languidly plaintive vocals set against a gradually accelerating riff underpinned by hand percussion, and Side One closes with a scabrous white noise intervention wherein the entire audio mix is fed through a contact mic placed in Radwan’s mouth. Moumneh continues to channel his love for Arabic pop and Casio/cassette culture on the silky lo-fi dance of “Lau Ridyou Bil Hijaz?” which opens Side Two, then pays homage to the until-recently-exiled Kurdish poet and singer Sivan Perwer on the traditional-minded, unadorned folk tune “Ta3mani; Ta3meitu”. The album closes with a tour-de-force drone piece built from Bansuri flute (performed by guest player Dave Gossage) and a delicate acoustic number set against the sound of waves recorded on a beach in Lebanon. (Song titles employ the transliterative characters used in Arabic phone texting.)

Coderre’s creation of the album artwork involved re-photographing images on 16mm film and then developing that film with bespoke chemical treatments of his own discovery and invention; the cover images result from this entirely hand-made and analog process. The album art is also an extension of the JIMH raison d’etre: the pursuit of innovative reciprocal relationships between celluloid film and live music performance, and the preservation of and experimentation with manual photographic methods and materials amidst a culture/tech industry that encourages the obsolescence of celluloid.

If He Dies, If If If If If If is an adventurous, scrupulous, impassioned and highly original work of modern contemporary Arabic music and a gratifying sign that Jerusalem In My Heart is situating itself in recorded works with the same thoughtful and dynamic intensity previously accessible only in live performances. (Needless to say, JIMH continues to be a must-see live act as well.)

IF HE DIES, IF IF IF IF IF IF TRACK LISTING:
1. Al Affaq, Lau Mat, Lau Lau Lau Lau Lau Lau
(The Hypocrite, If He Dies, If If If If If If)
2. A Granular Buzuk
3. 7ebr El 3oyoun (Ink From The Eyes)
4. Qala Li Kafa Kafa Kafa Kafa Kafa Kafa
(To Me He Said Enough Enough Enough Enough Enough Enough
5. Lau Ridyou Bil Hijaz (What If The Hijaz Was Enough?)
6. Ta3mani; Ta3meitu (He Fed Me; I Fed Him)
7. Ah Ya Mal El Sham (Oh The Money of Syria)
8. 2asmar Sa7ar (The Brown One Cast A Spell)
PRAISE FOR 2013’S MO7IT AL-MO7IT:
“The buzuk and zurna are played clean and processed while classic Arabic melismatic singing is melded to electronic textures and found sounds. The effect can be gentle, as on “3andalib Al-Furat”, where an acoustic instrumental is enhanced by birdsong, or far more transformative as on “Yudaghdegh El-Ra3ey Walal-Ghanam” where a pulsing synth undertow brings a glistening modernism to the traditional vocal melodies. The mix between elements shifts from track to track, but there is a common heartfelt yearning and emotion that unifies the album.” – WIRE
“A gauzy enigma of echo-drenched Arabic vocals, twanging buzuk, and grainy, over-saturated electronics.” – THE LIST
“This is a significant trope for strange and powerful music: JIMH might be an art group, but the weight of political debate is not far off. Indeed, the sighing, melismatic vocal of ‘Yudaghdegh El-ra3ey Walal-Ghanam’ speaks volumes. A male vocal placed over some electronic fuzz and a rhythm racing through a sequencer, it is both wistful and ecstatic.” – NEW INTERNATIONALIST
“The album builds to a grand scale, with insistent reverberating buzuk leading the breathless charge of vocals and electronics. Even stripped of all but the artwork’s lunar cycle traces of the visual aspect, Mo7it Al-Mo7it is a fascinating and subtly realised work from Jerusalem In My Heart, bringing potentially disparate strands to a unique whole.” – ROCK A ROLLA
“At once profoundly involving…a supremely powerful record – the sort to alter perceptions, and recompose narrow preconceptions over the creative outpour seeping out of the East. And though Moumneh’s path has been rerooted via Canada, there’s a sense that never shall his homeland cease to course through his atria and ventricles; arteries and veins. And so too should a shrine be carved out in your most vital of organs for this extraordinarily sanguine effort.” – DOTS AND DASHES
cstrecords.com
www.facebook.com/jerusaleminmyheart