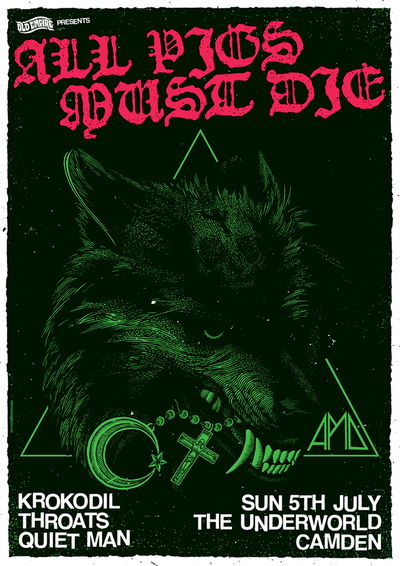 ALL PIGS MUST DIE UK EXCLUSIVE SHOW AT THE UNDERWORLD, LONDON 5TH JULY
In case you missed the news, All Pigs Must Die are bringing their blistering take on volatile hardcore/metal to the UK shores for the very first time in July. A hateful unification of musicians hailing from Converge, The Hope Conspiracy, American Nightmare, Bloodhorse and The Red Chord, the band will be playing London’s Underworld on July 5th, with Krokodil, Quiet Man, and the newly reformed Throats supporting. This is part of only two European dates this year (the other one being Roskilde Festival, Denmark), so you will not want to miss out on this skull-crushing, sonic onslaught.
Old Empire are putting on the show, and you can buy tickets HERE
Their latest full-length, Nothing Violates This Nature, is alive with the expected All Pigs Must Die hatesurge, yet carries the band’s brutal delivery into new realms of dissonant punishment with even more Swedish death metal instilled into their craft. Nothing Violates This Nature was recorded at Godcity with Kurt Ballou (Converge) and mastered at Audiosiege by Brad Boatright (From Ashes Rise). Aaron Turner has lent his nihilistic hand, pen and mind to develop along with the band the dark iconic artwork contained within.
Head on over to the APMD bandcamp page to listen to their last full-length, Nothing Violates This Nature, one of 2013’s cruelest sounding releases and a masterpiece of dense and fraught crust – https://apmdsl.bandcamp.com/
EXCLUSIVE EUROPEAN SHOWS
04/07/15 – Roskilde Festival, Denmark – Tickets
05/07/15 – Underworld, London UK – Tickets / Facebook
http://www.godiswar.com
http://www.facebook.com/apmdband
http://www.twitter.com/allpigsmustdie
http://www.southernlord.com
http://southernlord.bandcamp.com
https://www.facebook.com/SLadmin
http://twitter.com/twatterlord