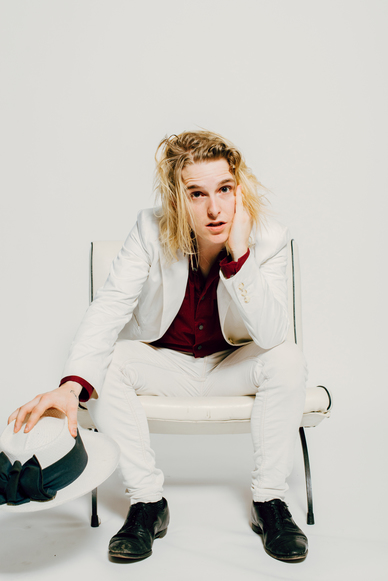 DIANE COFFEE
Foxygen Drummer Shaun Fleming Reveals Video for “Everyday” Taken From Forthcoming Album
Everybody’s A Good Dog, due out on 4 September on Western Vinyl
“…it’s like sifting through a treasure trove of half-remembered gems.” NME 8/10
“Given the strength of this debut, Fleming can’t be in much of a hurry to get back behind the drum kit.” Q 4*s
“…closer to those whacked-out 60s sounds than many latterday impersonators. Brilliant.” Record Collector 4*s
“As a vocalist this kid has soul and a true voice. As a songwriter he’s truly a maverick, having digested the best bits of the past to create something truly special.” Shindig
Former Disney actor, didgeridoo craftsman and Foxygen drummer, Shaun Fleming returns with his second venture as alter-ego DIANE COFFEE, Everybody’s a Good Dog. Originally from California, he moved to New York City with his Foxygen bandmates and suffering through a particularly harsh bout of flu, he recorded his first solo album My Friend Fish in just two weeks. The new album sees him again in a new home environment stemming from a spontaneous move to the artsy mid-western town of Bloomington, Indiana. Just as the move from sunny California to New York inspired a dark album with relatively optimistic lyrics, his move from New York to Bloomington inspired a bright energetic album with relatively dark lyrics.
Recorded in a proper studio (rather than on an iphone), the new album includes guest appearances (from Sam France and Jonathan Rado from Foxygen among others), horns and a string ensemble, finally bringing to life Fleming’s deep well of talent and ideas. The album’s unstoppable grooves and melodies were written with live performance in mind, dipping in to 60s psychedelia as well as early New York Dolls to create a fully realized musical tour de force that Fleming has been working towards all his life.
Premiered on NPR, the comedic video for the first single “Everyday” sees an over enthusiastic Fleming gathering oddball characters to form a band for the local DIY talent show. NPR describe the track as “A smooth and soulful rock anthem, it embraces the glitter of The Supremes’ vocal harmonies, the glam of David Bowie’s Aladdin Sane and the hooks of T. Rex — mixing in some Rocky Horror Picture Show sing-along choruses for good measure.”
hyperurl.co/DianeCoffeeiTunes
http://www.roughtrade.com/albums/95105