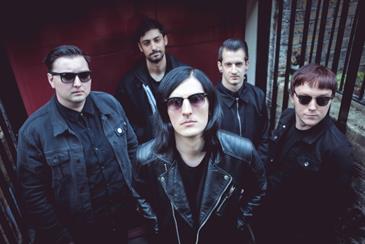 “A stunning statement of intent from one of the brightest prospects in UK punk.” – Kerrang!

Southampton’s goth-punk quintet CREEPER have enjoyed a phenomenal rise since their first sold-out hometown show at The Joiners last August. Having subsequently debuted in London with a rammed set at The Old Blue Last, they then hit the road for their first full tour as guests to Funeral for a Friend. After a rapturously received performance at this weekend’s Camden Rocks Festival, CREEPER can now confirm that they have signed a recording contract with Roadrunner Records.

“Roadrunner Records has been a constant in our lives ever since we were young,” says vocalist Will Gould. “They have been a hugely important part of my young life, from picking up the first Slipknot album to The Misfits’ record ‘Famous Monsters’. To be involved with a record company who have put out some the defining records of our youth is incredibly exciting for us. It’s difficult to convey just how thrilled we are to be joining the Roadrunner family and to be making records together.”

Will Gould and guitarist Ian Miles formed CREEPER from the fading embers of cult hardcore favourites Our TimeDown Here. The line-up was completed with the addition of former Hang The Bastard guitarist Sina Nemati as well as bassist Sean Scott and drummer Dan Bratton.

CREEPER’S self-released debut EP established their musical blueprint, which combines the black-hearted punk rush ofAFI, The Misfits and The Damned with the theatricality of David Bowie and My Chemical Romance as well as the dark romanticism of Nick Cave. The band are also inspired by old school horrors such as The Exorcist, The TwilightZone and Phantom of the Paradise, as well as films which celebrate the outsider such as Heathers and Stand By Me.

CREEPER are currently putting the finishing touches to their first EP for Roadrunner. Set in the band’s hometown of Southampton, the video for first track ‘LIE AWAKE’ is the first instalment of a two part story of life, love and obsession which will conclude later in the year.