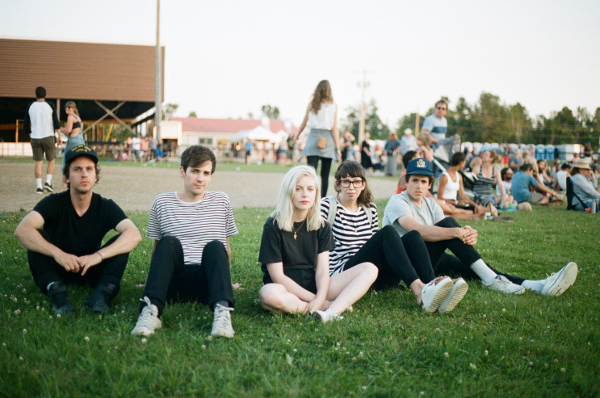 Live dates throughout June, August and September – including Glastonbury, Reading and Leeds and End of the Road festivals & huge headline show at O2 Shepherds Bush Empire

Canada’s Alvvays announce the release of their new single ‘Adult Diversion’, released 22nd June before the band embark on their biggest ever UK tour, which includes shows at Reading and Leeds Festival and finishes with a headline show at London’s Shepherd’s Bush Empire. The band have also this week been confirmed to play this year’s Glastonbury Festival.Taken from their acclaimed self-titled debut, released via Transgressive Records, ‘Adult Diversion’s jangly rhythms conceal a dark lyrical theme, helping it to become a firm live favourite.  Following an incredible 2014, which saw their album named as one of the best of year from the likes of Rolling Stone, NME and DIY and Best Fit, Alvvays have toured relentlessly. Their forthcoming tour will be the last UK trip in support of their current album, before the band record new material.

Tickets for all shows are available now.

“… you cannot help but be drawn in” – Sunday Times Culture – Debut of the Week
“… genuinely great moments” – Guardian
“Charming and cherishable” – MOJO
“A great debut record laced with melancholy and beautiful moments.” NME – 8/10
“It’s a timeless, modern classic.” The Line of Best Fit – 9/10
“With each effort packing at least half a dozen unique hooks, it’s difficult for anything to come off remotely dull.” DIY – 4/5
“Stardom beckons.” The 405 – 8/10
“the songs on Alvvays are pretty indestructible” Drowned In Sound – 8/10
“This is the sound of pristine pop music” Pitchfork – 7.6