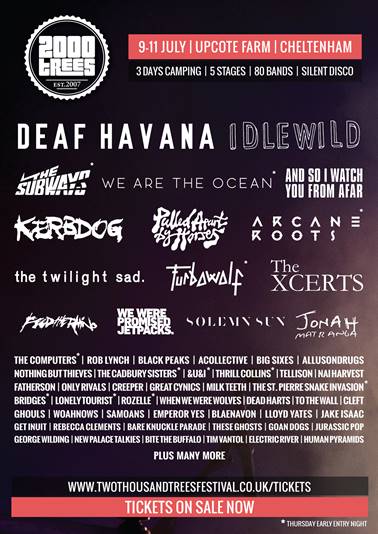 Festival season is well and truly upon us, with so many festivals now on our doorstep it’s hard to pick the best one to attend; one that’s the best value for money, one that’s booked a wide plethora of talent to tick everyone’s boxes, one that guarantees to show you the best time.

That being said there are a few festivals we thoroughly recommend, those that we’ve been busy pushing with each announcement made. One particular festival which was established in 2007, has continuously worked hard each year to provide exactly that, the best festival. 2000 trees, based in Cheltenham will soon boast it’s efforts when the gates swing open to welcome this year’s attendee’s and the festival’s best supporters- their fans.

The award-winning 2000trees Festival this year celebrates its ninth year near Cheltenham, on 9-11 July. Featuring the very best new and underground music on six stages, plus comedy, DJs, a silent disco, quality food and drink and children’s entertainment. The festival have announced it’s exceptional line up which include Alkaline Trio, Deaf Havana, Idlewild,And So I Watch You From Afar, Mclusky*, The Skints, Future of the Left, Kerbdog, Pulled Apart By Horses, Rory Indiana, Arcane Roots, The Xcerts, Bury Tomorrow, Allusondrugs, The Twilight Sad, Benjamin Booker, We Were Promised Jetpacks, Turbowolf, The Lion and The Wolf,  Feed the Rhino, The Cadbury Sisters, Boston Manor, and Defeater to name a few.

To coincide with the fast approaching July dates, from now up until the day before the fun begins, Circuit Sweet will be hosting a special 2000 trees Artist Feature. Taking a closer look at some of the talent playing and introducing our readers to a handful of acts in a more personal manor; as we talk to the musicians to find out about their musical endeavours, their live sets and what we can look forward to from them on the day, as well as their top artist to see at trees.

Now with less than 2 weeks away from this highly anticipated event, we reveal our first festival interview as we introduce you to the Isle Of Wight based melancholic singer songwriter, The Lion And The Wolf. 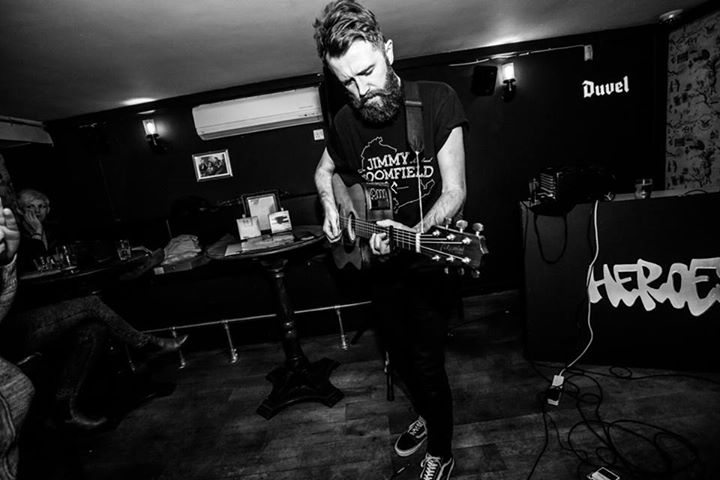 My name is Tom George and at present I am the solo performing member of The Lion and the Wolf, but that is all changing soon, which is exciting. I sing and play guitar / emit between-song banter. I’ve been performing and touring for a few years but only started full time in January last year after quitting my job.

I formed TLATW in 2010 after my old band broke up and I went through ANOTHER kind of break up which lead to me writing a bunch of songs in my room and recording them onto my laptop. The first song I wrote in this period was called ‘The Lion and the Wolf’ and was basically about incompatibility with another person and I liked it as a name, plus I love Thrice who have it as a song name too so it seemed apt.

What do you think you bring to your live performances, sell your showmanship, sell us your sets.

Well, as I’m the only member it’s kind of down to me to get it right. Otherwise I can only blame myself if something goes wrong. Thankfully there isn’t a huge amount that can go wrong when playing solo (he says, being the worlds most accident prone man!)

I genuinely believe that I am at my most happy when touring and performing. It’s something that puts my mind at ease as I tend to overthink a lot and analyse everything that is going on around me. The songs I sing about are, as is the same with every musician, really personal and when somebody who watched can make a connection with that I really get a buzz and it helps me to continue what I am doing.

How would you describe the reception to your live presence?

I don’t overly understand the question but i’ll give it a ruddy good go. One thing I love doing is performing on eclectic bills and particularly heavy bills. The acoustic crossover with hardcore and more aggressive music has really come into light recently and I get a real kick out of playing heavy shows as I’m into many heavy bands and when people see ‘The Lion and the Wolf’ they figure it must be a band. So when I get up there on my own and start playing it’s a bit of a shock to people I get a buzz from that.

That really does change and depend on how I’m feeling. At the moment it’s a brand new song called ‘The Pinching Point’ which I wrote only two weeks ago. Another favourite is ‘Symptoms’ but to be honest, like I say, it completely depends on the atmosphere and what kind of mood I am in.

I’m looking forward to seeing my good friend Rob Lynch play as we used to tour together relentlessly when we were younger in the worlds smallest car. To see him doing so well at the moment is amazing — proud of the dude. Even though his main aim in life seems to be to troll me on the Internet, the swine.

It will be, yes. I’m really stoked to be playing with so many good bands.

Well, I’m only there for the Friday sadly as I’ll be touring with the excellent PJ Bond in July which should be awesome. He is a real pioneer of modern-day DIY ethic so to be doing these shows with him is a real pleasure.

Festivals are great as a goer for being able to see all of these bands in one weekend and meet a lot of cool people. I can’t say for sure that I am a true festival goer – I didn’t used to go to them when I was younger and just leaned toward the smaller, more intimate shows. I’m loving the fact that smaller festivals are now becoming the go-to place to see new music though.

Hand sanitation stuff, without a doubt. You’re own toilet roll and multi vitamins. Take one before sleep after a big night on the booze and you should feel a bit less rough in the morning.

I’ve got a pretty packed out year, I’m heading out on my first full band tour of Europe in October and also touring with PJ Bond in July and then Portugal in September. On top of this I’m back in the studio in-between tours to finish my second record.

Just my upcoming tour dates! Many thanks for this. So stoked for 2,000 trees!

Tom, such a pleasure, you’re no stranger to the site it’s great to finally chat to you and we look forward to hearing more from you at the festival!

Now you’ve discovered just one great act from such an impressive line-up get excited to hear more. The countdown has well and truly begun, there is a small number of tickets left so if you’ve not got yours yet then don’t delay.