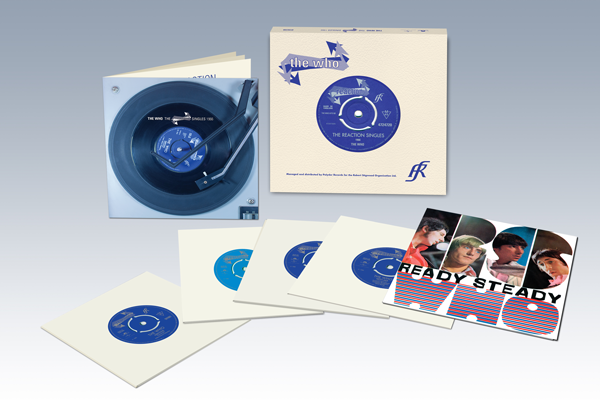 There is no more significant a milestone in Rock Music than the 50th Anniversary. Through the decades, THE WHO redefined rock music as we know it and their influence continues in all areas of popular culture to this day.

THE WHO HITS 50 continues throughout all of 2015 with very special re-releases throughout the year, a huge celebratory show in Hyde Park and headlining the Pyramid stage at Glastonbury for the second time.

As part of the on going celebrations on August 14th the second in a series of 7” singles box sets is released following on from The Brunswick Singles 1965-66 which was an instant sellout when released earlier in the year.

‘The Reaction Singles 1966’ is volume two of a four part set of classic Who singles by labels (Brunswick, Reaction, Track and Polydor). Containing five 7” singles from the Reaction label pressed on heavyweight vinyl with paper sleeves (reproducing the period graphics front and back with die-cut centre holes).

The singles are housed in a rigid ‘lid-and-tray’ outer box and features a 7” sized colour booklet with liner notes about each release by Who biographer Mark Blake.

In early 1966, The Who broke their contract with producer Shel Talmy and Brunswick Records, they signed a temporary deal with their agent and future music mogul Robert Stigwood’s independent Reaction Records. In March, just before Brunswick released A Legal Matter without the Who’s permission, the band issued their own new single, Substitute.

The Who’s bust-up with Shel Talmy meant that the original Substitute single, with Circles on the flipside, had to be withdrawn from sale. The Who reissued the single a week later with Circles re-titled Instant Party.

When Substitute reappeared for a third time, it’s new B-side, an instrumental entitled Waltz For A Pig, was credited to ‘The Who Orchestra’ but actually featured another of Robert Stigwood’s clients, the Graham Bond Organisation. Despite that legal tug of war, Substitute reached Number 5 in the UK; a timeless snapshot of The Who in their power-pop prime.

A five-track EP released in November ’66, the title of Ready Steady Who referenced the popular ITV pop show Ready Steady Go, on which the band were regular guests.

The EP’s song selection was certainly eclectic, Circles, a track that had appeared as the B-side of the original Substitute single, made a re-appearance on the A-side here, and was joined by a new Townshend composition, Disguises, a song driven by hypnotic percussive rhythms and jangling guitar. The reverse side of the EP featured The Who in a lighter mood. It included one of their current live numbers, a version of the popular Batman TV show theme, plus two of Keith Moon’s favourite songs: US surf duo Jan And Dean’s Bucket T and Barbara Ann, which had been a hit for The Beach Boys earlier that year.

NOTE: Reaction issued 3 versions of 591001. The first two were as above but the b-side had differing titles.

This is version 3 with the unusual b-side credited to ‘The Who Orchestra’.

As one of the greatest live bands of all time, The Who will take to the Great Oak Stage in London’s iconic Hyde Park on Friday 26th June for Barclaycard Presents British Summertime with very special guests Paul Weller, Kaiser Chiefs, Johnny Marr, Gaz Coombes and many others. The all-day bill will feature many more brilliant acts that owe an artistic debt to one of the most influential of all British bands.

ANAVAE Release New Single ‘Human’ – from forthcoming debut album ’45’, out 01 November via A Wolf At Your Door