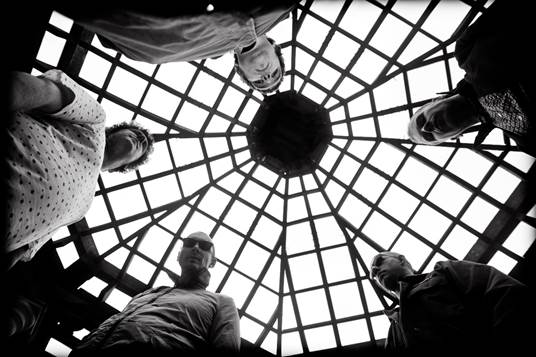 “They infuse a range of transatlantic styles (early rock’n’roll, Merseybeat, skiffle) into their infectious sound and will surely take beer-soaked caverns near you by storm anytime soon” – Q Magazine

In their short time together the band have built up a loyal fanbase and have received glowing endorsements from the likes of BBC Introducing’s Gary Crowley, Pete Mitchell at Absolute Radio and Liam Gallagher.

The band has recently cut their teeth on the live circuit with four sold out shows supporting London mods The Rifles and The Jesus and Mary Chain on the Nottingham leg of their UK tour.

The Magpies have a keen eye for classic song craftsmanship and pop sensibilities which are showcased perfectly in this self-titled debut release. Album opener ‘All I Am’ blends West Coast psychedelic fever with Spaghetti Western landscapes while recent double A-side single ‘Money’, is stomping 60s pop-soul meets rhythm and blues – an unashamed rally to the working classes.

‘This Chose Me’, is a near-perfect synthesis of scouse skiffle, early American rock’n’roll, and British Invasion sounds before the chiming, ‘Straight Lines’ draws on the hook-laden, sparkling guitars of the post-punk pop of The Smiths and The La’s.

Whilst there’s a proud boasting of 60s R’n’B throughout the eleven tracks, ‘(How Long) Does the Fire Burn’ is rootsy rock, bursting with life and hooks while ‘Forever’s Too Soon’ is modern day psychedelia.

“When we went into the studio we wanted to make an album that was pretty raw and rootsy, to try and keep it as close to the live sound as possible and concentrate on the songs and I think that’s what we’ve achieved , we all just got in a room, mic’d everything up and played”, says singer-songwriter Lee Knowles.

The songs are delivered with an aesthetic sensibility that is at once magical and uplifiting and completely accessible to anyone with an interest in well-written, -played, -produced, and -sung pop.

‘Foundation’ and the catchy pop nugget that is ‘Rollercoaster’, lend themselves to the bubblegum pop era of bands like The Monkees and ‘Fifth Dimension’ era Byrds, with a nod to more recent artists including The Coral and Jake Bugg.

The Magpies show a more delicate, softer side with the beautiful, acoustic-led ‘Castles in the Sand’ which has a timeless, classic feel to it – the perfect dream from which you will never wake before our senses are roused once more by the punchy ‘The Night Won’t Wait’.

It’s left to album closer ‘Round and Round’, to provide an explosive finish proving that ‘The Incredible Magpie Band’, although at once a relic of the past in terms of its sonic simplicity, in 2015 terms, utterly unique for a pop record.

(How Long) Does the Fire Burn

Castles In The Sand