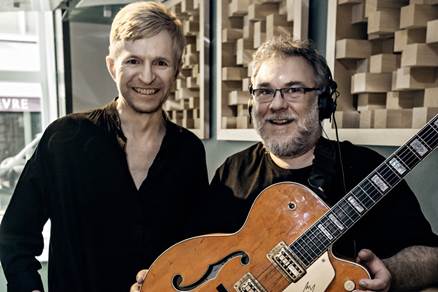 “The great crooner of the electronica era, the Swedish singer is known for his evocative and melancholic voice that’s reminiscent of romantic singers from days gone by.” – Time Out

“A rich bedrock of composition; the static waves of ambient noise that give way to stilted beats and some gorgeously restrained keys.” – GoldFlakePaint

“Jay-Jay Johanson knows when to head out to left field – but he also knows when to take centre stage. An electronic crooner, the Swedish artist’s material veers from pole to pole” – Clash Magazine

After the release of his wondrous 4 track EP, ‘Moonshine’, Swedish producer, songwriter and avant-garde extraordinaire Jay-Jay Johanson returns with his 10th studio album ‘Opium’, out 8th June on Kwaidan Records. With masterful musicianship and soulful, melancholic vocals, Johanson takes us down a dreamlike road, telling 10 stories through 10 songs, inviting us into his dark and all-encompassing world.

‘Drowsy’ opens the album unconventionally, with a reverb-laden harmonica playing roadside blues, Johanson describes it as “entering suburbia with Tom Sawyer and Huckleberry Finn…”. The intro lulls us into a false sense of knowing before changing tempo and weaving an eerie beat with ‘Too Young To Say Good Night’. It’s colder here than the albums opening would have us believe, it’s here where we enter Jay-Jay Johansons universe, like Alice through the looking glass. He skilfully intertwines touches of jazz piano and a dirty drum beat with a deep, repetitive bass line and echoes of the harmonica that originally invited us in.

Previous single ‘Moonshine’ is a tragic love letter told against a dark, cinematic backdrop, with a pulsating and ghostly beat and heavy electronics. Johanson composed the track with the soundtracks of both Ennio Morricone and John Barry in mind, and explains that “the song tells a story of being in love with someone that might not be the best one for you, but sometimes you just can’t resist the choice of your heart.”

We’re led by the hand into ‘Be Yourself’ next. This slow, sweet love song has a more retrocentric feel to it, close vocal harmonies and a thoughtful brass section, played by Johanson himself, joins from the distance before a rolling fuzz builds into the trip hop beats of ‘I Love Him So’. Here, German duo Funkstörung bring something new to the table, with breakbeat electronics and experimental soundscapes reminiscent of Massive Attacks ‘Mezzanine’. There’s emotion to these crooning vocals, ‘I Love Him So’ was is song about Johanson’s son, written it in the waiting room of a hospital where he was being treated.

‘NDE’, or ‘Near Death Experience’ lays down a harder beat made up of the claps and foot stomps of Johanson and his son, recording together, while ‘I Don’t Know Much About Loving’ shines through with a heavy groove and soulfully wistful vocals atop beautifully dissonant piano stabs.

Jay-Jay Johanson has had a close working relationship with Robin Guthrie of Cocteau Twins since 1997, having appeared on a number of records together. On ‘Scarecrow’ Guthrie returns to give us a taste of what the two have been working on lately, and a glint of what a future album might sound like together. ‘I Can Count On You’ continues along this path with mellow grooves with pop sensibilities.

As the album winds down, we’re taken down new roads, more otherworldly sounds are introduced, as if this opium induced dream has reached its climax and now we enter the darker corners of Johansons mind. ‘Alone Too Long’ spins its story against a dark, cinematic backdrop and ‘Harakiri’, the only instrumental on the album, leaves us with room for thought as ambient melodies drift atop a vintage drum machine.

‘Celebrate The Wonders’ closes this epic with the sound of water, rushing against rocks, washing us ashore to bring us softly back to land. This rich, textured ballad does well to exit us from the dreamscape, almost transcendental, journey that ‘Opium’ takes us on. It’s grounding, smooth and familiar.

With further touring plans, and future releases already being planned, Jay-Jay Johanson is set to cast his net wide over 2015, and ‘Opium’ is a perfect gateway drug into the rich and diverse world he has created.

6. I Don’t Know Much About Loving

Oso Oso Release “Where You’ve Been Hiding” Off Of ‘Real Stories Of True People, Who Kind Of Looked Like Monsters…’‏