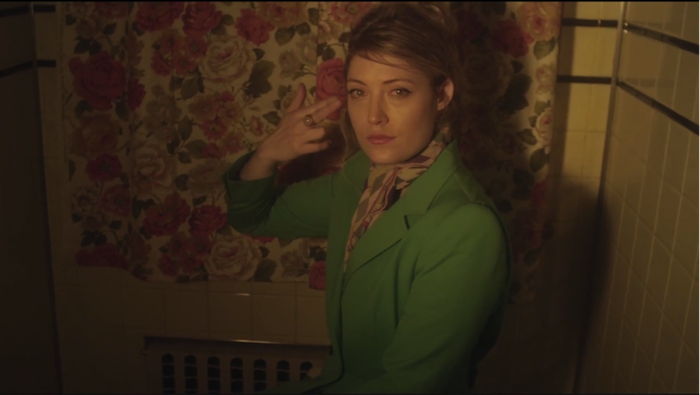 – SHARES NEW VIDEO ‘THAT BATTLE IS OVER’

“Her voice, an understated soulful purr that somehow twists between innocence and experience, adolescent naiveté and forbidden-fruit knowledge” – Pitchfork on ‘That Battle is Over’ (Best New Track)

With just over a month until the release of her new studio album ‘Apocalypse, girl’ (June 8th, Sacred Bones), Jenny Hval is sharing a new video for debut single, ‘That Battle Is Over’.

The video was directed by Zia Anger, who also directed Hval’s ‘Innocence Is Kinky’ video, and stars several renowned women in the artists, including Melissa Auf der Maur. It chronicles these women in an antiquated suburban fantasy depicting stereotypical feminine tasks, such as baking, childrearing and putting on makeup. Hval’s lyrics are heightened by this anachronistic presence.

Anger describes it as such, “I guess it goes back to ’96 for me, and the ‘girl power’ mantra I’ve been repeating since I learned it from the Spice Girls. The female experience is far from singular (and even further from this white, suburban, American-retro dream), yet around every corner there is a common pain, a wisdom of ecstasy, and an obsession with the uncanny that we all share. Collaborating with an entirely female creative team (with the support of a few great gentlemen) gave birth to an exploration of Jenny’s song and an inquiry into the sarcasm that pulses through it.”

Apocalypse, girl is out June 9th on Sacred Bones, and available for pre-order now. After recent support slots in North America with St. Vincent and Perfume Genius and a European tour ahead in June, Hval will return to the U.S. for a headline tour beginning in August. The live band will consist of Hval (vocals, synths), Håvard Volden (electronics), and Zia Anger (visual enhancement). All dates are below.